Barcelona's first slip-up since returning from the three-month hiatus hands Real Madrid the chance to regain top spot in La Liga this weekend. 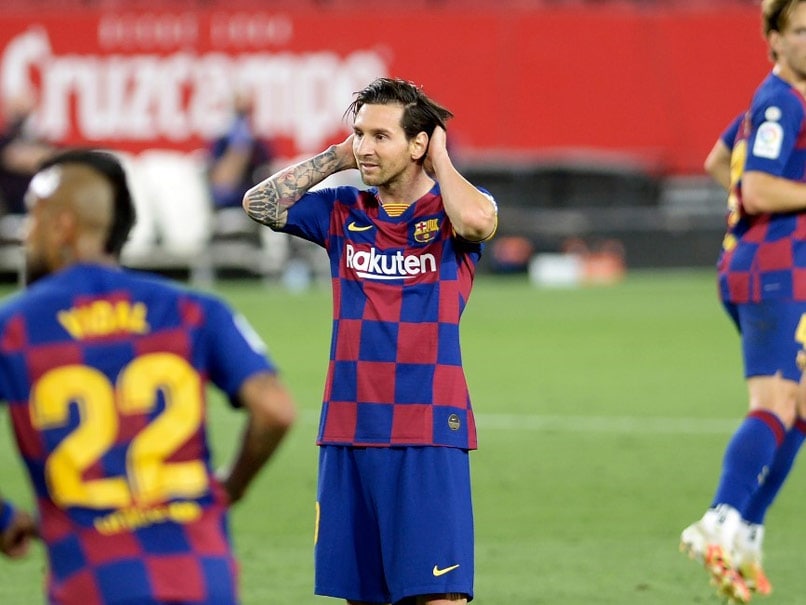 Barcelona were held to a goalless draw against Sevilla on Friday.© AFP

Gerard Pique said La Liga's title race is Real Madrid's to lose after Barcelona were held to a goalless draw against Sevilla on Friday. Barca's first slip-up since returning from the three-month hiatus hands Madrid the chance to regain top spot this weekend. After their emphatic 3-0 win over Valencia on Thursday, Zinedine Zidane's side will move level on points with the Catalans if they beat Real Sociedad on Sunday and above them due to their superior record head-to-head. "Seeing what we've done in the last two rounds, it's going to be very difficult to win this league," said a despondent Pique afterwards.

"From what I've seen, it's very hard to see Real Madrid dropping points."

Sevilla, in third, and Valencia, in eighth, always looked capable of shifting the dynamic at the top of the table, with Madrid capitalising to climb back to the summit for the first time since they beat Barcelona on March 1.

Asked about Pique's analysis, Barcelona coach Quique Setien said: "I think it comes from frustration. I am optimistic. I think it will be tough for anyone to take maximum points."

A valuable point for Sevilla, meanwhile, gives them a five-point cushion over Getafe in fifth, albeit having played a game more.

Barca could have few complaints at the Ramon Sanchez Pizjuan.

They never really troubled Sevilla for any prolonged period and the closest Lionel Messi came to scoring the 700th goal of his career were a pair of free-kicks tipped over.

The sight of goalkeeper Marc-Andre ter Stegen jogging up for a late corner demonstrated how big a blow they considered dropping points to be.

Yet Real Sociedad are still in the hunt for Champions League qualification and will offer Madrid no guarantees on Sunday while games against Getafe, Athletic Bilbao and Villarreal mean there are still plenty of hurdles for Zidane's team to overcome.

Barcelona though would appear to have the tougher run-in, with Athletic Bilbao, Atletico Madrid, Villarreal and local rivals Espanyol coming up.

Messi was well-contained by Sevilla and it could be the Argentinian was feeling the effects of a third consecutive 90 minutes in nine days.

Setien chose not to rest his captain in either of two comfortable wins over Leganes or Real Mallorca.

Instead, Antoine Griezmann dropped to the bench, with Martin Braithwaite preferred in the front three alongside Messi and Luis Suarez, who made his first start since January after recovering from a knee injury.

Sevilla's Jules Kounde shot just wide of the post early on but Barcelona controlled the opening 30 minutes, even if chances were few and far between.

Messi's curled free-kick was headed off the line by Kounde and Braithwaite almost had a tap-in when Tomas Vaclik spilled, but the ball was hacked away.

The half ended with a clash and Messi was at the heart of it, squaring up to and then pushing over Sevilla's centre back Diego Carlos. Messi was unhappy with Carlos' challenge on Suarez but escaped punishment.

Ever Banega came on at half-time for Sevilla and gave them more purpose in midfield. Munir El Haddadi's shot from the angle was palmed away by Ter Stegen.

The game opened up in the final 15 minutes as Jordi Alba made a crucial block to prevent Munir's pass setting up an easy finish in the middle.

Alba might then have teed up a winner too but Suarez swept the defender's pull-back over the bar.

Sergio Reguilon, on loan at Sevilla from Madrid, had the best chance but he failed to connect with his weaker right foot.

Earlier, Gerard Moreno's winner gave Villarreal a 1-0 win away at Granada, putting them within touching distance of the top four.

Real Mallorca claimed a 1-1 draw against fellow strugglers Leganes thanks to a stunning late free kick from Oscar Rodriguez.