The Brazilian-born striker lead the high-flying club to a 2-1 victory over Celta Vigo. 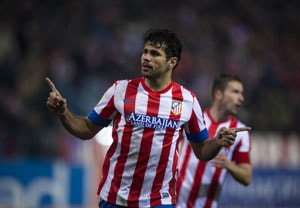 Diego Costa made up for the disappointment of his non-inclusion in the Spain squad by scoring twice as Atletico Madrid made it eight wins from eight league games with a 2-1 victory over Celta Vigo.

The Brazilian-born striker was not included in Vicente del Bosque's squad on Friday as the paperwork that will make him eligible for the world champions was not completed in time.

However, he again made his case for a future call up with another two strikes to take him top of the La Liga scoring charts with 10 goals, two ahead of Lionel Messi.

It could have been even better for Costa had he not seen a first-half penalty saved by Yoel Rodriguez.

He made amends just before half-time by tapping home from Filipe Luis' cross and then drove home a second 17 minutes after the break.

Nolito's cute finish 19 minutes from time made it a nervy finish for Diego Simeone's men, but they held on to move level with Barcelona on 24 points at the top of the table, five points ahead of neighbours Real Madrid.

And Simeone acknowledged that his side had paid towards the end for not killing the game off.

"The first-half was very complete, but we just needed the goal," he said.

"With complete territorial dominance and when you are playing well offensively the important thing is to finish your chances.

"We didn't do that and therefore we found ourselves in difficulty near the end."

The Argentine denied that his side had suffered physically in the final quarter after two demanding games against Real Madrid and Porto in the past week and instead gave credit to Celta for their revival towards the end.

"It wasn't a physical dip, but the fact the opponent grew into the game. It is a normal situation.

"We always had the threat of the counter-attack, but it Celta's good play that forced us back."

Had it not been for Yoel in the Celta goal Atletico would have been well ahead by the interval as they overwhelmed the visitors in the opening 45 minutes.

David Villa ought to have scored when played clean through on goal by Costa, but Yoel stood up well to block from the Spanish international.

Costa then had a golden chance to open his account for the day when Luis was chopped down by David Costas, but again Yoel prevailed as he dived low to his left to save the spot-kick.

The breakthrough did finally come three minutes before the break when another galloping run from Luis took him to the by-line and he squared for Costa to bundle home from barely a yard out.

Atletico's pace dropped slightly at the beginning of the second period, but they had a glorious chance to make the game safe on 56 minutes when Costa teed-up Villa only for the former Barcelona man to side-foot wide with the whole goal to aim for.

The second goal did arrive just six minutes later as Costa showed great strength to collect Mario Suarez's long pass, shrug off Costas and then thump the ball under Yoel.

However, Celta were suddenly back in the game on 71 minutes when Nolito withheld Juanfran's challenge inside the area and dinked a composed finish over Thibaut Courtois to half the deficit.

The hosts then endured a nervy final quarter as Celta pushed in search of an equaliser.

And Courtois was forced into his first serious save of the match deep into stoppage time as he flew to his left to turn away Nolito's 25-yard free-kick to seal the three points.

Comments
Topics mentioned in this article
Atletico Madrid Football Argentina Bayern Munchen Sreesanth
Get the latest updates on ICC T20 Worldcup 2022 and CWG 2022 check out the Schedule, Live Score and Medals Tally. Like us on Facebook or follow us on Twitter for more sports updates. You can also download the NDTV Cricket app for Android or iOS.