Eden Hazard had become a growing concern after five underwhelming matches, the patience granted to him after his injury in pre-season beginning to run out after his 100 million euros move from Chelsea. 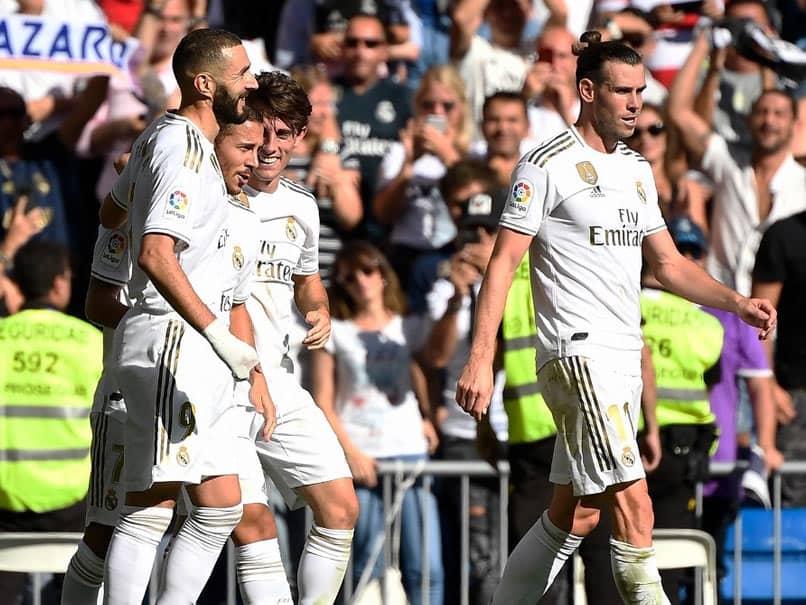 Eden Hazard ended the wait for his first Real Madrid goal but his team had to resist a spirited second-half comeback from Granada to seal a thrilling 4-2 victory in La Liga on Saturday. Karim Benzema put Real ahead in the second minute at the Santiago Bernabeu before Hazard opened his account with a delightful lifted finish towards the end of the first half. Luka Modric's bending long-range effort on the hour looked to have confirmed the win but Granada scored twice in quick succession through Darwin Machis and Domingos Duarte, the first from the penalty spot, to set up a tense last 12 minutes.

James Rodriguez, on as a substitute, ended the rally by scoring his first goal since May 2017 in injury-time to wrap up an unexpectedly dramatic contest between the league's top two.

Granada stay second, for now, after suffering only their second defeat of the season.

Madrid had been in complete control, their fluency and tempo contributing to arguably the best hour of football they have played this season.

Yet a hectic 20-minute period in the second half took some of the gloss off a performance that at least gets Zinedine Zidane's side back to winning ways following their 2-2 draw at home to Club Brugge in the Champions League on Tuesday.

Eden Hazard had become a growing concern after five underwhelming matches, the patience granted to him after his injury in pre-season beginning to run out after his 100 million euros ($109 million) move from Chelsea.

The Belgian still looks some way short of his best but his goal here was timely, not just for him but also Real, who will go into international break top of the table, despite their own bumpy start to the season.

Toni Kroos walked off injured in the first half to be replaced by Modric, which will be a worry for Germany, who play Argentina in a friendly on Wednesday.

Gareth Bale returned after being rested against Brugge while Alphonse Areola came in for the ill Thibaut Courtois in goal. Areola's mistake gave away the penalty, and perhaps any hopes he had of keeping Courtois out longer-term.

Madrid conceded after 122 seconds on Tuesday but needed only 102 to take the lead here. Playing on the right, Bale often makes use of the outside of his left foot and the bend he created to bypass two Granada defenders and find Benzema at the backpost was superb. Benzema could not miss.

Madrid created several early chances. A slick move down the left between Bale, Benzema and Dani Carvajal saw the latter go clear while Benzema and the impressive Fede Valverde both went close too.

Bale was first to congratulate Hazard when he scored shortly before half-time but Valverde created it, driving past two Granada midfielders before intercepting Duarte's header and poking the ball through. Hazard finished just in time, lifting it coolly into the net.

The second half grew increasingly bad-tempered, broken up by late tackles and complaints to the referee. Yet when Modric collected Hazard's pass on the hour, after another Valverde chase, and found the top corner, the game looked finished.

Instead, Granada were given a lifeline. Areola had just failed to claim a cross when moments later he dallied in his box and caught Carlos Fernandez in a rushed attempt to clear.

Darwin Machis scored the penalty and with 12 minutes left, they made it 3-2, Victor Diaz heading to the back post where Duarte prodded in.

Madrid were suddenly alive to the unexpected threat and Benzema should have made it four in the 86th minute but his shot was saved. James did, a quick break ending with Alvaro Odriozola finding him with the pull-back. The relief was palpbale.

Granada Eden Hazard Football
Get the latest updates on IPL 2021, IPL Points Table , IPL Schedule 2021 , live score . Like us on Facebook or follow us on Twitter for more sports updates. You can also download the NDTV Cricket app for Android or iOS.