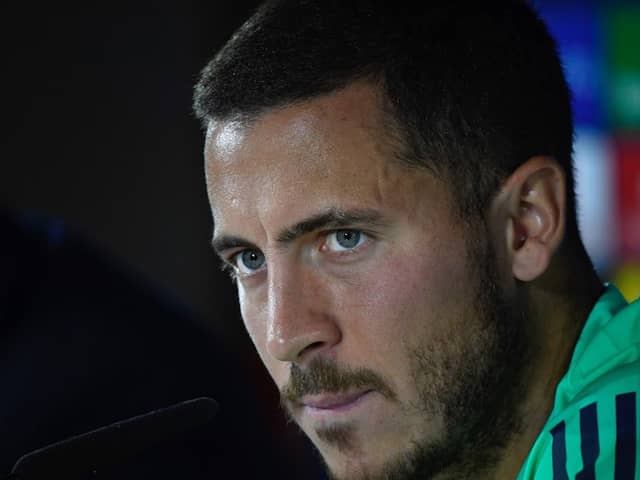 Eden Hazard said criticism did not affect him© AFP

Eden Hazard said on Monday he is 'one goal' away from launching his Real Madrid career having failed to score since joining the Spanish club this summer. Hazard, 28, who cost Real 100 million euros ($109 million) in July, is yet to get off the mark during the new season with his appearances restricted to four matches due to a thigh injury. "Honestly I feel at 100%, the injury is behind me. When I start scoring, being decisive, having good matches, it will all come together," Hazard said ahead of playing Club Brugge in the Champions League on Tuesday.

"That's what I'm missing, one good match, one goal, one pass, something to start my season.

"When I say it's down to confidence, once I'm confident, I'll give my best on the field."

The 102-time Belgium international, who signed for the Spanish giants after impressing for Chelsea in the Premier League and Lille beforehand, only made his competitive debut for Zinedine Zidane's side in mid-September due to the injury sustained in pre-season training.

Hazard has been the target of negative attention from the Spanish press, with some claiming he was overweight ahead of the new campaign.

"There was my injury, everybody expected I would score three goals a game.

"I need a little time, it's up to me to give my maximum in training, take pleasure on the field, like I've done my whole career, and the goals will come," he added.

Real host Brugge after falling to a humiliating 3-0 loss to Paris Saint-Germain in their opening Champions League game of the campaign.

They sit top of the La Liga table after seven matches with France international Karim Benzema their top goal-scorer on five, followed by Wales forward Gareth Bale on two.

Real Madrid Eden Hazard Football
Get the latest Cricket news, check out the India cricket schedule, Cricket live score . Like us on Facebook or follow us on Twitter for more sports updates. You can also download the NDTV Cricket app for Android or iOS.