Barcelona came back from a goal down to beat Real Sociedad 2-1 while Real Madrid were held to a 1-1 draw by Athletic Bilbao. 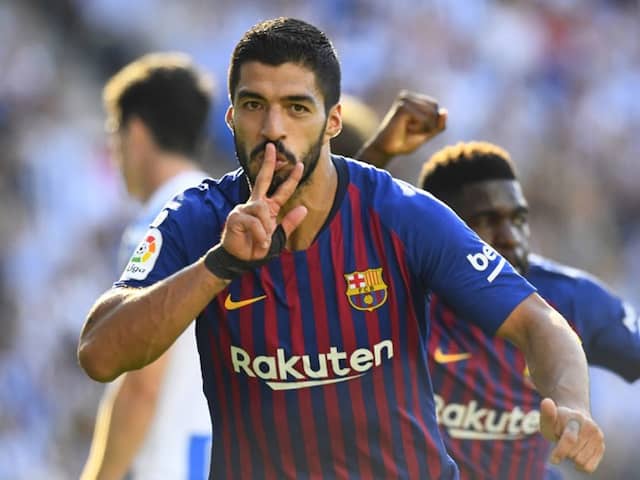 Luis Suarez celebrates after scoring the equaliser for Barcelona vs Real Sociedad.© AFP

Barcelona came from behind to beat Real Sociedad on Saturday as Real Madrid lost ground in La Liga after a 1-1 stalemate at Athletic Bilbao. Real, unbeaten after three games, fell behind to Iker Muniain's 32nd-minute goal on a counter-attack. Athletic keeper Unai Simon held Real, who open their UEFA Champions League campaign against Roma at the Santiago Bernabeu on Wednesday, at bay until Isco headed in Gareth Bale's assist after the hour. The draw put Julen Lopetegui's men on 10 points, two adrift of Barcelona with Atletico Madrid also slipping back in the La Liga title race by drawing at home to Eibar.

Seven points is now the gap between Atletico and Barca, who were in danger of tripping up themselves when Aritz Elustondo put Real Sociedad in front at Anoeta.

But the hosts missed a series of excellent chances and paid the price, as two goals in three minutes from Luis Suarez and Ousmane Dembele clinched a hard-fought 2-1 win.

"The league is defined by these kind of games," Suarez said afterwards. "Last year we also came back from 2-0 after many years without winning here. The reaction says a lot about this team."

Atletico rallied too, Borja Garces equalising with virtually the last kick of the game, but there were no celebrations at the Wanda Metropolitano.

Garces' strike was enough only to rescue a 1-1 draw for Diego Simeone's side, who had looked on course for defeat when Eibar's Sergi Enrich bundled home in the 87th minute.

Barcelona might easily have dropped points too had their opponents been more clinical.

Mikel Oyarzabal and Theo Hernandez both could have made it 2-0 after half-time but the former blazed over and the latter was denied by Barca keeper Marc-Andre ter Stegen.

Within minutes, they were behind, as two crosses caused havoc in Real Sociedad's defence, with Suarez and Dembele perfectly placed to pounce.

Barca coach Ernesto Valverde had made the surprise decision to omit Sergio Busquets from his starting line-up, presumably with Tuesday's Champions League opener against PSV Eindhoven in mind.

But it was testament to the hosts' performance that Busquets was called upon in the second period after Philippe Coutinho had also been introduced at half-time.

"In the first half they closed us down well but Philippe coming on in the second half helped changed the dynamics," Suarez said.

Simeone might also have liked to keep one eye on their Champions League game against Monaco on Tuesday, but a victory was much-needed following defeat to Celta Vigo two weeks ago.

Antoine Griezmann and Diego Costa, however, were both sloppy in the final third and Eibar might even have scored earlier, twice denied by the woodwork.

It means Atleti have now recorded their worst league start since 2009.

"I would worry if we had not created those chances to score," Simeone said. "The team also showed a reaction after their goal. We continued to push forward and managed to take a point."

Athletic Bilbao Football
Get the latest Cricket news, check out the India cricket schedule, Cricket live score . Like us on Facebook or follow us on Twitter for more sports updates. You can also download the NDTV Cricket app for Android or iOS.