Kylian Mbappe On Target As PSG Win Without Injured Neymar

PSG have now taken maximum points since starting the season with back-to-back defeats and the reigning champions are three clear of Lille and Rennes at the summit. 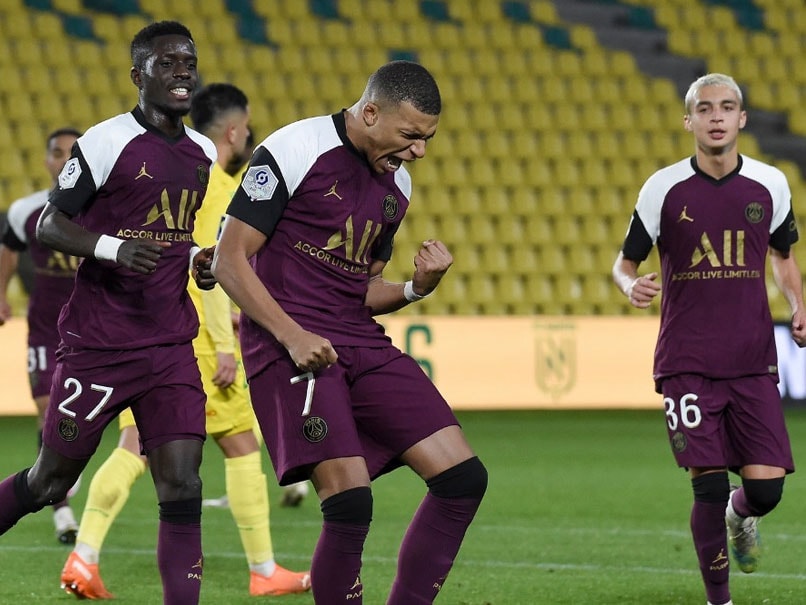 Kylian Mbappe scored from the penalty spot as Paris Saint-Germain eased to their seventh straight Ligue 1 win on Saturday, beating Nantes 3-0 away to move provisionally three points clear at the top of the table. All the goals came in the second half at the Stade de la Beaujoire, with Ander Herrera opening the scoring two minutes after the restart and Kylian Mbappe converting a 65th-minute spot-kick before Pablo Sarabia secured the points late on. PSG have now taken maximum points since starting the season with back-to-back defeats and the reigning champions are three clear of Lille and Rennes at the summit.

Lille, who are unbeaten, can rejoin the club from the capital at the top if they beat Lyon on Sunday. Rennes beat Brest 2-1 on Saturday.

"I am very happy. We made lots of changes because we felt it was necessary. We don't expect things to be perfect and spectacular all the time," said Paris coach Thomas Tuchel.

He made six changes to his line-up following the 2-0 midweek win at Istanbul Basaksehir in the Champions League, with Neymar one of those missing after suffering an adductor injury that is expected to keep him out until the upcoming international break.

However Nantes, whose game at Lens last weekend was called off following a coronavirus outbreak in their opponents' squad, were missing an entire back four here, including three to Covid-19.

Sarabia hit the post early on for the visitors in this game, played behind closed doors after France returned to a full national lockdown in an attempt to stem a surge in coronavirus cases.

'No injury' for Kean, Mbappe

Kolo Muani then curled a shot agonisingly wide after a Herrera slip had let Nantes in, before PSG took off Moise Kean -- scorer of four goals in the previous two games -- at the break.

The league leaders got the breakthrough at the start of the second half when Mbappe picked out the former Manchester United midfielder Herrera to fire home.

Mbappe, who moved from the left wing to a more central role in the second half, then benefited from a very soft penalty award when he went down under pressure from Jean-Charles Castelletto.

The World Cup winner stroked home the penalty for his seventh league goal of the season, all of which have come in the last six matches.

He was then withdrawn and headed straight down the tunnel clutching his right hamstring, but Tuchel said it was nothing to worry about ahead of Wednesday's key Champions League clash with RB Leipzig in Germany.

"It is just fatigue. It's not an injury," said Tuchel. "The same for Kean. He had just taken a few knocks."

Just before Mbappe went off, Nantes won a penalty of their own when Colin Dagba fouled Marcus Coco in the box, but Abdoul Kader Bamba's effort from 12 yards was saved by Keylor Navas.

- Rennes back on track before Chelsea -

PSG have conceded just one goal in their seven-game winning run, while Sarabia chipped in after pouncing on Imran Louza's back-pass to make it 23 goals scored in that time.

Earlier Rennes got back on track by coming from behind to beat Brest as they prepare to go to Chelsea in the Champions League in midweek.

Defensive duo Damien Da Silva and Nayef Aguerd got the goals for Rennes after Franck Honorat had given the visitors the lead at Roazhon Park in a Brittany derby.

A third-place finish in the last, curtailed French season allowed Rennes to qualify for the Champions League for the first time, but they have taken just one point from their first two group games, a 1-1 draw with Russians Krasnodar being followed by a 1-0 loss away to Sevilla in midweek.

They face Chelsea in London on Wednesday, a game which will be missed by teenage France midfielder Eduardo Camavinga, who is injured and also played no part against Brest.

Paris SG Lille Kylian Mbappe Neymar Football
Get the latest updates on ICC T20 Worldcup 2022, check out the Schedule and Live Score. Like us on Facebook or follow us on Twitter for more sports updates. You can also download the NDTV Cricket app for Android or iOS.