Tottenham midfielder Niko Kranjcar is prepared to look for an off-season move away from the English Premier League if he does not play more regularly before the end of the season. 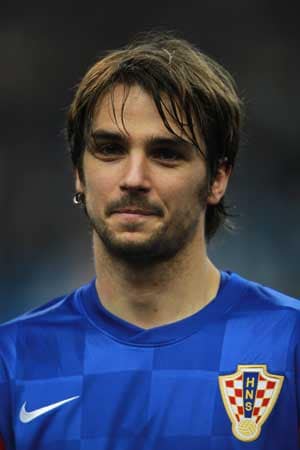 Tottenham midfielder Niko Kranjcar is prepared to look for an off-season move away from the English Premier League if he does not play more regularly before the end of the season.

The Croatia international has started only two league games for Spurs this season, with seven substitute appearances. Despite that, Kranjcar has scored two winning goals.

Speaking to The Associated Press after Croatia's 0-0 draw with France late Tuesday, Kranjcar said he will be "trying to find a football club where I can play regularly, like any footballer would" if his situation does not improve.

Asked if he would consider a move away from England, Kranjcar said "I would, yeah, to learn another language as well" but that it "depends who wants me, if anyone wants me."

"I obviously miss football," he said. "I'm not in my best shape because I don't play week in, week out. So obviously those 90 minutes (against France) help towards getting fitter and hopefully get some more chances."

Kranjcar, who turns 27 in August, was not prepared to keep warming the bench.

"I'm ambitious, I want to play football. Especially in my best years. If I was a young lad, obviously I would wait for my chance, especially being in a big club like Spurs," he said. "But, obviously, 27, 28, 29 years is, I think, the best footballing years.

"Everyone knows I can play at the highest level, week in week out ... I'll only come on as a sub (at the moment)."

Kranjcar, who won the FA Cup playing under coach Harry Redknapp when they were with Portsmouth in 2008, was not about to kick his manager's door down, despite his evident frustration.

"It's not mine to (question) the manager's decision, it's mine to respect and to wait for my opportunity and my chance," Kranjcar said. "He's the one who takes the blame for good and bad results, and obviously it's going great this season again."

Kranjcar's frustration was greater because, when he does get the chance to play, he produces.

He scored winning goals against Bolton and Sunderland in consecutive league games last month. He has also scored five goals for Croatia this season, including both in a 2-1 win away against Israel in Euro 2012 qualifying. He has 14 goals in 64 games for Croatia.

"It's the most frustrating situation I have had," Kranjcar said. "I think it's been the season I probably scored the most goals and felt I played the most mature football in my career, and then again played the least minutes, probably."

Being a left-sided midfielder does not help, seeing as he is up against Gareth Bale for a starting position.

"Back at Spurs the team is amazing. The amount of talent we've got is ridiculous," said Kranjcar. "You understand when you're not picked in front of Gareth Bale. I mean, he's gone and had an unbelievable season."

There are only nine league games remaining for Kranjcar this season, starting away at Wigan on Saturday.

"I still feel a part of the team," he said. "I did have a big part in the season, and I hope I will have another part to play in it."

Ideally, that would also mean facing Real Madrid in the Champions League quarterfinals, or for the return leg at White Hart Lane.

"(It) would be a dream come true," Kranjcar said. "But, obviously I don't see that happening. If it does I'll be ready for them."

Comments
Topics mentioned in this article
Football Newcastle United Tottenham Hotspur Manchester United Niko Kranjcar Patrice Evra
Get the latest updates on ICC T20 Worldcup 2022 and CWG 2022 check out the Schedule, Live Score and Medals Tally. Like us on Facebook or follow us on Twitter for more sports updates. You can also download the NDTV Cricket app for Android or iOS.