The 26-year-old German-born Ghanaian international started his career in the Bundesliga with Hertha Berlin, his hometown team, in 2005. 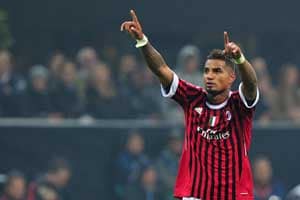 "Everything is clear between us and we are delighted that this transfer has been completed. He is exactly what we needed," Toennies was quoted as saying.

Sport Bild reported that Boateng had already passed a medical and would move for a fee of 12 million euros ($15.9m) on a three-year deal that carries an option for a fourth season.

The 26-year-old German-born Ghanaian international started his career in the Bundesliga with Hertha Berlin, his hometown team, in 2005.

The half-brother of Bayern Munich and Germany defender Jerome Boateng, he moved to Tottenham Hotspur for 7.9 million euros in 2007 and returned briefly to Germany with Schalke's bitter rivals Borussia Dortmund before joining Portsmouth and then Milan.

He scored twice in the Italian team's 3-0 victory against PSV Eindhoven in their Champions League play-off second leg on Wednesday that took them through to the group stage 4-1 on aggregate.