Real Madrid will begin their quest for a 10th European Cup without Kaka and coach Jose Mourinho against Dinamo Zagreb on Wednesday in the Spanish club's opening group stage match of the Champions League. 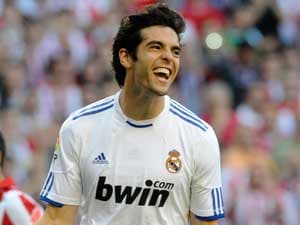 Real Madrid will begin their quest for a 10th European Cup without Kaka and coach Jose Mourinho against Dinamo Zagreb on Wednesday in the Spanish club's opening group stage match of the Champions League.

Kaka will not make the trip to Zagreb because of a reported heel injury, while Mourinho serves the second of a three-match ban resulting from an outburst during the ill-tempered semi-final series against Barcelona last season.

Kaka came on as a substitute in Madrid's 4-2 win over Getafe on Saturday and has struggled to dislodge Mesut Oezil from the starting 11 this season. Midfielders Lassana Diarra and Sami Khedira are both included in the 21-man squad.

Madrid's excellent start to the season makes it the favorite to win Group D, which also includes Lyon and Ajax.

Mourinho guided Madrid to the semi-finals last season and has promised further success in his second year in charge - a Champions League or Spanish league trophy is the minimum expected after a Copa del Rey victory in his debut season.

"He, like all of us, want more this season. We want to take it up a level," said Madrid goalkeeper Iker Casillas, who marks 12 years in the first team this week. "He's given us more character and made us more ambitious. It's always good to have a coach with character and with ambition to work hard because that feeds hunger into the changing room."

Dinamo will be playing in Europe's elite competition for the first time since 1999.

Ajax coach Frank de Boer conceded that Madrid is likely to win the group, saying his team was fighting for second place and advancement.

Ajax, which is undefeated and leads the Dutch league, has no major injuries to worry about, so De Boer said the team will stick with its usual fluent passing style in an attempt to neutralize the threat from Lyon.

"The first match is crucial. We can take a big step toward progressing, preferably in the Champions League," De Boer said. "We are going to play to our strengths. There's no point in changing our style."

Lyon, meanwhile, beat Dijon 2-1 on Saturday to stay unbeaten in the French league.

The French side will be without center back Cris (hamstring) and striker Lisandro Lopez (ankle), while playmaker Yoann Gourcuff has yet to play due to a bothersome ankle injury.

Comments
Topics mentioned in this article
Football R Kaka Real Madrid Dinamo Zagreb
Get the latest updates on IPL 2020, check out the IPL Schedule for 2020 and Indian Premier League (IPL) Cricket live score . Like us on Facebook or follow us on Twitter for more sports updates. You can also download the NDTV Cricket app for Android or iOS.