Jurgen Klopp fears Liverpool captain Jordan Henderson may not play again this season after undergoing groin surgery as he grapples with a deepening injury crisis at Anfield. 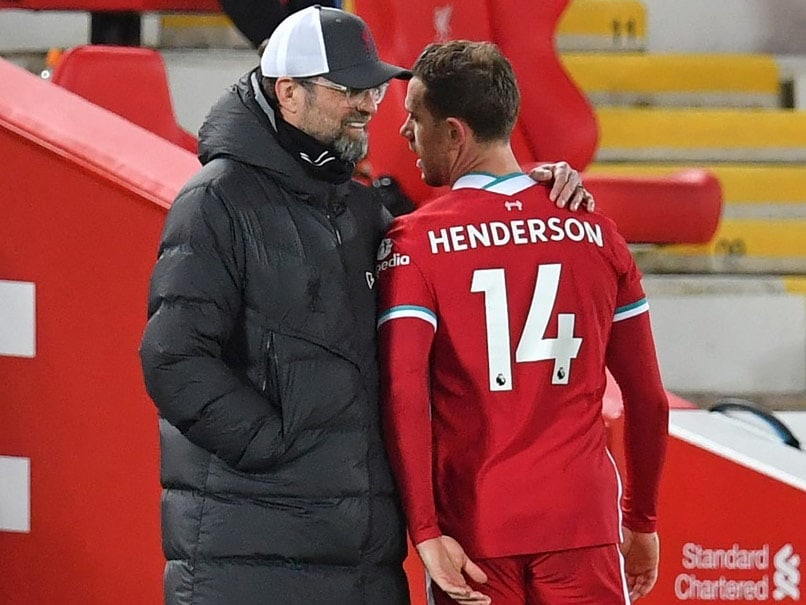 Jordan Henderson was forced off half an hour into a 2-0 home defeat to Everton last weekend.© AFP

Jurgen Kloppfears Liverpool captain Jordan Henderson may not play again this season after undergoing groin surgery as he grapples with a deepening injury crisis at Anfield. The midfielder was forced off half an hour into a 2-0 home defeat to Everton last weekend and further investigation revealed the need for an operation. Liverpool's Premier League title defence has been badly undermined by season-ending injuries for centre-backs Virgil van Dijk, Joe Gomez and Joel Matip.

Henderson has been forced to deputise in defence for long stretches of the season and his absence is another major blow to the Reds' hopes of qualifying for the Champions League next season.

After a run of four consecutive league defeats, Klopp's men are sixth in the table, five points adrift of the top four.

"It's not a quick one," said Klopp on the timescale for Henderson's return. "But we all hope there is a possibility for him to play a few games this season."

In a statement earlier Friday, Liverpool said Henderson will be out until after the March international break at the earliest.

The England international will definitely miss Sunday's trip to Sheffield United as well as games against Chelsea, Fulham and Wolves in the Premier League plus the second leg of Liverpool's Champions League last-16 tie with RB Leipzig.

Goalkeeper Alisson Becker could also be missing for the trip to Bramall Lane after his father died in a swimming accident this week in Brazil.

In more positive news for Klopp, forward Diogo Jota is on the verge of returning after more than three months out with a knee problem.

"Diogo trained now twice with the team," said Klopp on the possibility of the Portuguese returning this weekend. "He looks very good, in training it looks really promising, but he was a long time out."

Missing out on Champions League football next season would be a devastating blow to Liverpool's finances and affect the opportunity for a rebuild in the summer transfer market.

And Klopp acknowledged his side have to find a return to winning ways against bottom-of-the-table Sheffield United to bolster their hopes of a top-four finish.

"It's a big challenge," he said. "You only have to look at the points, it's not too far off, but it is a distance. We just have to try to win as many games as possible but of course it is a challenge."

Liverpool Jordan Henderson Football
Get the latest updates on IPL Auction 2023 and check out  IPL 2023 and Live Cricket Score. Like us on Facebook or follow us on Twitter for more sports updates. You can also download the NDTV Cricket app for Android or iOS.