Goalkeeper Julio Cesar saved a last minute penalty to rescue a point for 10-man Inter Milan away to Brescia on Friday night. 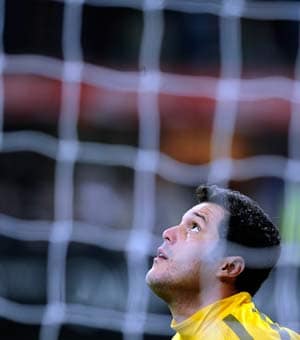 Goalkeeper Julio Cesar saved a last minute penalty to rescue a point for 10-man Inter Milan away to Brescia on Friday night.

Samuel Eto'o scored his 31st goal of the season to give the champions a first half lead before Andrea Caracciolo equalised six minutes from time.

But then substitute Ivan Cordoba was sent-off for bringing down Eder in the box only for Cesar to save Caracciolo's spot-kick.

In a bizarre finish, Caracciolo then also received his marching orders for a second yellow card.

The point means AC Milan could extend their Serie A lead to seven points if they beat rock-bottom Bari on Sunday.

Inter coach Leonardo claimed his side had deserved more than a draw.

"We had many chances and there could have been a different result," he said.

"In the first half we played as we expected to, we went ahead and managed the game well but in the second half we conceded a goal from a set-piece and that changed the game.

"I.m not too keen on draws, this was a strange draw because we made a lot of chances and it wasn't a typical drawn game.

Showing no ill-effects from the trauma and tragedy afflicting his homeland Japanese full-back Yuto Nagatomo made a determined run into the Brescia box on 13 minutes but his attempted cross deflected off Jonathan Zebina and goalkeeper Michele Arcari scrambled the ball behind for a corner.

The champions went in front on 18 minutes as Wesley Sneijder's corner was flicked on by Andrea Ranocchia and Eto'o prodded home from inside the six-yard box.

Brescia's best chance of an uninspiring first half came on 34 minutes as Panagiotis Kone played the ball into the box where Caracciolo lifted it over Cesar but also the bar.

And the big striker was quickly involved again at the start of the second half as he got across his marker to head a right wing cross just over the bar.

He then shrugged off Ranocchia only to be denied by Cesar under pressure from the back-tracking Dejan Stankovic.

Inter came quickly back into the game and Giampaolo Pazzini lashed wildly off target before Arcari came out quickly to save at Goran Pandev's feet.

Sneijder then fired through a crowd of players from 16 yards but hit his effort straight at Arcari.

Ten minutes from time Pandev had another great chance from eight yards out when teed up by Eto'o but his shot hit Arcari in the face.

But just four minutes later Alessandro Diamanti's corner was headed back into the danger zone by Zebina and Caracciolo headed home from close range.

It could have got worse for Inter as Kone arrived at the back post to hit a volley into the ground that bounced up and just wide of the far post.

Then came the late drama as Diamanti sent Eder running in on goal and Cordoba clipped him from behind, earning a straight red card.

But Cesar plunged to his right to stop Caracciolo's penalty and earn a vital point.

Deep into injury time Caracciolo was dismissed before Stankovic got back to save Inter after Eder had rounded Cesar.

Comments
Topics mentioned in this article
Football Inter Milan Julio Cesar
Get the latest updates on ICC T20 Worldcup 2022 and CWG 2022 check out the Schedule, Live Score and Medals Tally. Like us on Facebook or follow us on Twitter for more sports updates. You can also download the NDTV Cricket app for Android or iOS.