Head coach Hansi Flick sent Bayern Munich on a break after winning the German Cup last Saturday before fine-tuning their preparations for the return of European competition. 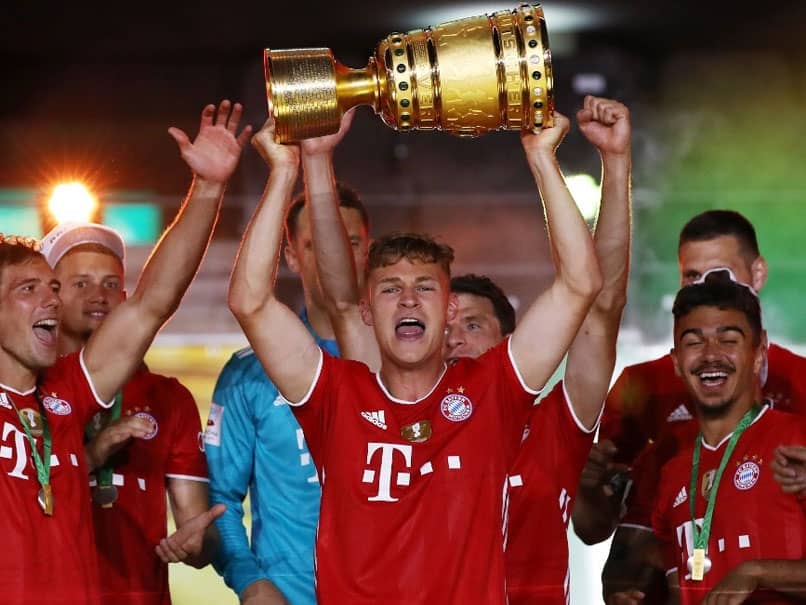 Joshua Kimmich called on his team-mates to keep training during their break.© AFP

Bayern Munich midfielder Joshua Kimmich said on Wednesday the double-winning German champions must stay "fully focused and greedy" for more silverware during their two-week holiday before launching their assault on the Champions League. Head coach Hansi Flick sent Bayern on a break after winning the German Cup last Saturday before fine-tuning their preparations for the return of European competition.

"Now it's time to recharge our batteries and then tackle the Champions League with full focus and greed," the 25-year-old told magazine Sport Bild.

After completing the double with a 4-2 cup final win over Leverkusen, the Bavarians are on a 17-match winning streak dating back to February.

Under Flick, Bayern have won all 11 games since the season resumed in Germany in mid-May amid the coronavirus pandemic.

Bayern are chasing a treble and are among the favourites in Europe after routing Chelsea 3-0 in London in the last 16, first leg, last February before the Champions League was halted due to COVID-19.

Bayern still need to finish the tie to reach the quarter-finals and the draw for the remaining rounds of the knock-out stages takes place this Friday.

Kimmich called on his team-mates to keep training during their break to maintain the desire for the Champions League finals in Lisbon next month.

"It will be decisive how we return from vacation: we want to keep that feeling, that hunger," Kimmich added.

Having stumbled last November, when Flick succeeded Niko Kovac who was sacked following a 5-1 thrashing by Frankfurt, Bayern are now in great form.

Robert Lewandowski has scored 51 goals this season, including 34 in the Bundesliga and is the Champions League's top-scorer with 11.

Behind the Poland striker, Thomas Mueller has 25 assists, including a record 21 in the Bundesliga.

Kimmich has bossed the defensive midfield alongside Germany team-mate Leon Goretzka and suggests his side have developed a mental edge.

"In the last two seasons, the mentality has been the most important factor in winning the German league title," said Kimmich.

"Bayern may be ahead of other teams in this respect."

However, Flick has said they are fighting to keep left-back David Alaba and playmaker Thiago Alcantara, who has been linked to Liverpool, with both players out of contract in 2021.

According to Spanish media reports, midfielder Javi Martinez is also considering leaving with a year left on his contract.

Bayern München Joshua Kimmich Football
Get the latest updates on India vs Australia Series, check out the India vs Australia Schedule for 2020-21 and Ind vs Aus live score . Like us on Facebook or follow us on Twitter for more sports updates. You can also download the NDTV Cricket app for Android or iOS.