Chelsea F.C. manager Jose Mourinho insisted that he would not ask owner Roman Abramovich and the Chelsea board to sanction the acquisition of fresh faces once the transfer window opens in January. 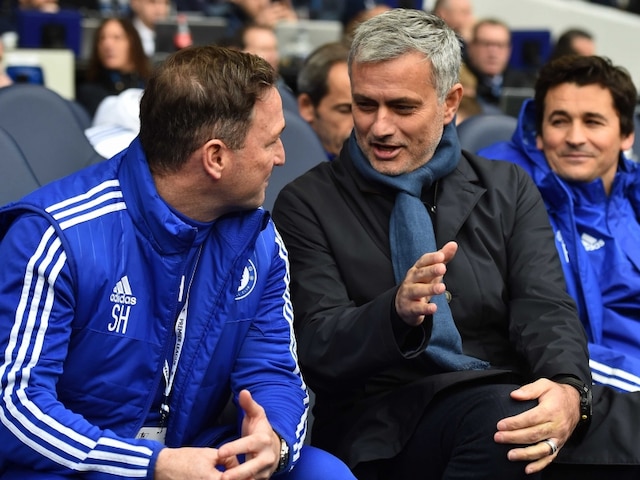 Chelsea's manager Jose Mourinho (right) was highly critical of his players for failing to score against Bournemouth.© AFP

Newly-promoted Bournemouth won 1-0 at Stamford Bridge on Saturday evening thanks to an 82nd-minute goal from substitute Glenn Murray.

That left last season's champions marooned in 14th place and 14 points off a top-four place, and Mourinho was highly critical of his players for failing to score against a team that had never before kept a clean sheet away from home in the top flight.

But he stood by an earlier promise that he would not ask owner Abramovich and the Chelsea board to sanction the acquisition of fresh faces once the transfer window opens in January.

"Again I feel that we don't have the right to ask the club for players," he said.

Murray had only been on the pitch for a few seconds when he headed home from close range, and was actually offside when he did so, with Bournemouth having earlier survived a penalty appeal when Diego Costa's cross hit Simon Francis on an arm.

"We didn't deserve this result," said Mourinho. "In our best period, when everybody was waiting for our goal, they score. It was a penalty and the goal was offside. The referee made a mistake and the linesman made a mistake, and that's football."

The goal was by no means Bournemouth's only opportunity however and fit-again goalkeeper Thibaut Courtois, playing for the first time in three months, made a number of saves.

But Mourinho claimed his players had also created enough chances to win, and was disappointed that only Nemanja Matic, who was wearing a protective face mask and headed a clear opportunity over the bar in the second half, made contact in front of goal.

"We had a lot of chances and half-chances and we couldn't touch the ball, which is disappointing because with all these crosses from the right side, you have to touch the ball in the face of the goal, then it is no chance for the 'keeper," Mourinho said.

"The only chance where we had contact with the ball was the Matic one where he had difficulty with the mask, and the cross was really fast. I know the goal was empty but that one was difficult.

"The other ones were big chances. They do not go on the statistics of the game because they were not shots on target but these ones you have to score."

The win allowed Bournemouth to climb out of the bottom three and manager Eddie Howe was delighted to add another chapter to the extraordinary story of a small-town club that teetered on the brink of bankruptcy just a few years ago.

"I think it is at the very top," said Howe, who must now prepare for next weekend's visit of Manchester United.

"We have never been in the Premier League before so when you come to the champions and beat them then it must rank as the best individual result in the club's history.

"And I am very pleased that this group of players has achieved that. It gives the players some reward for how hard they have worked. We have been hit with a lot of things -- the injuries and some dominant performances that haven't won games -- and it has been tough.

"The players have kept going, they have not lost their honesty and it is nice for them to have some reward for that. It is only one game but it does give us a huge boost going into the Christmas period."

Comments
Topics mentioned in this article
Chelsea Nemanja Matic Football
Get the latest Cricket news, check out the India cricket schedule, Cricket live score . Like us on Facebook or follow us on Twitter for more sports updates. You can also download the NDTV Cricket app for Android or iOS.