After being eliminated by Borussia Dortmund in the Champions League semifinals, Mourinho was asked if he'll return to the club next season and simply replied: "Maybe not." 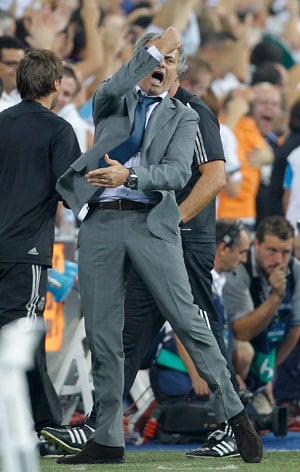 Jose Mourinho gave his biggest hints yet Tuesday that he is set to leave Real Madrid in the offseason and is eyeing a return to England.

After being eliminated by Borussia Dortmund in the Champions League semifinals, Mourinho was asked if he'll return to the club next season and simply replied: "Maybe not."

Asked where he would be, Mourinho then said he didn't know but that "I love to be where people love me to be."

In the following news conference, the former Chelsea manager said that place was England.

He added that "in Spain the situation is a bit different because some people hate me. And many of you are in this room."

The comments are likely to fuel more speculation about a return to Chelsea, where interim manager Rafa Benitez is set to leave after the season.

However, Mourinho said no final decision has been made yet and that he remains intent on finishing the season with Madrid and winning the upcoming Copa del Rey final against crosstown rival Atletico Madrid on May 17.

"It's difficult to make a decision because I like the club," he said.

Mourinho led Madrid to the Spanish league title last season but the team was eliminated in the Champions League semis for the third straight year despite a 2-0 win over Dortmund on Tuesday, having lost the away leg 4-1 last week.

Comments
Topics mentioned in this article
Football Borussia Dortmund Real Madrid John Terry
Get the latest updates on ICC T20 Worldcup 2022 and CWG 2022 check out the Schedule, Live Score and Medals Tally. Like us on Facebook or follow us on Twitter for more sports updates. You can also download the NDTV Cricket app for Android or iOS.