Jermain Defoe got on the scoresheet on the stroke of half-time, added his second in the 54th minute and completed his hat-trick 10 minutes before time. 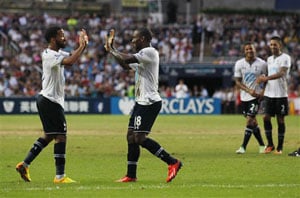 Tottenham Hotspur eased to a 6-0 romp over a hopelessly outclassed South China on Saturday in Hong Kong with Jermain Defoe scoring a hat-trick and setting up another successful strike.

Tottenham manager Andre Villas-Boas had admitted that he would rather not be playing the Barclays Asia Trophy friendly because of the state of the pitch at the sell-out 40,000 Hong Kong Stadium after several days of heavy rain.

Key defender Jan Vertonghen faces a race to be fit for the start of the Premier League season in three weeks after injuring his ankle in a 3-1 defeat to Sunderland at the same venue on Wednesday.

But in front of a watching David Moyes, whose Manchester United play there on Monday, Defoe made light work of a pitch that had large amounts of sand thrown on it.

The England striker, 30, whose future at Spurs has been the subject of speculation, set up Clint Dempsey on 34 minutes, the American striker side-footing home from close range.

Defoe got on the scoresheet on the stroke of half-time after Kyle Walker's deflected free-kick fell into his path, allowing him the chance to calmly finish inside the box.

Defoe, who also hit the woodwork in the first-half, grabbed his second on 54 minutes. This time there was a large slice of luck in it as South China goalkeeper Zhang Chunhui's attempted clearance from a Danny Rose pass hit Defoe and the forward rolled the ball into the empty net.

And Defoe completed his hat-trick on 80 minutes when he passed the ball into the back of the net after Gylfi Sigurdsson played him through.

Spurs had taken the lead on 12 minutes when a Rose cross from the left spun in off South China defender Sean Tse.

Sunderland play Manchester City in the final of the Barclays Asia Trophy later on Saturday.

Comments
Topics mentioned in this article
Football Tottenham Hotspur Clint Dempsey Jermain Defoe
Get the latest Cricket news, check out the India cricket schedule, Cricket live score . Like us on Facebook or follow us on Twitter for more sports updates. You can also download the NDTV Cricket app for Android or iOS.