Javier Mascherano, who had been rested for Saturday's anarchic 5-2 win at home over Rayo Vallecano helped provide such much needed stability to the Barcelona midfield, which allowed Neymar to set up Ivan Rakitic for two decisive goals on Tuesday night. 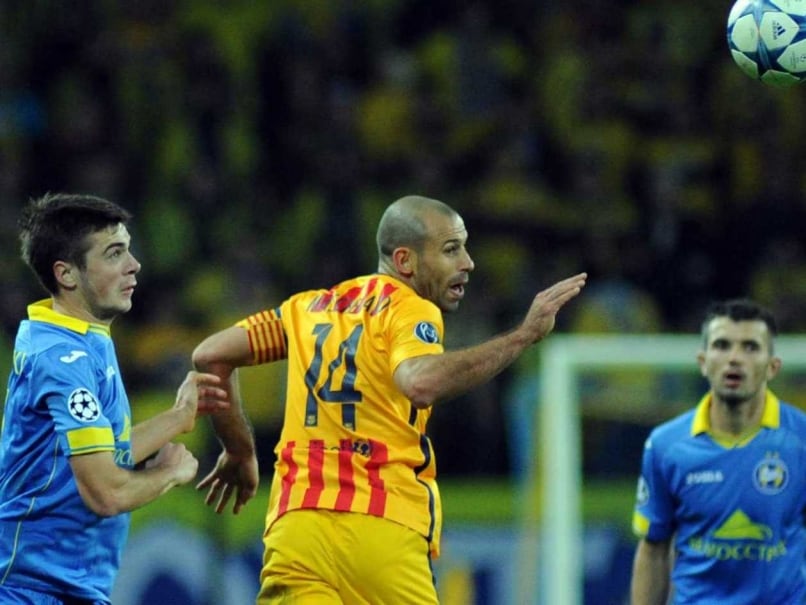 Javier Mascherano in action for Barcelona in the Champions League.© AFP
Barcelona:

FC Barcelona midfielder Javier Mascherano played an important role in his side's 2-0 Champions League win away against BATE Borisov before admitting they have not been at their best this campaign.

The Argentinean, who had been rested for Saturday's anarchic 5-2 win at home over Rayo Vallecano helped provide such much needed stability to the Barcelona midfield, which allowed Neymar to set up Ivan Rakitic for two decisive goals on Tuesday night, reports Xinhua.

"We are not at our best level. We all know that, but if we work hard, the team can improve and this is the first step towards the level that we all want. It's not easy to be at your best all of the time, but we want to improve and stop making mistakes," said Mascherano after the game.

"We worked hard to win this game and although it took time to score the first goal (which arrived in the 49th minute), we are used to being patient," he said, before praising Neymar, who was a handful for the home defenders all game.

"He is a great player. You can't compare him to Lionel Messi, because nobody can replace Messi, but Neymar and Suarez are two of the best players there. With Messi out, they have to give a step forward and they are doing that, but all of us have responsibility and now is when we have to be more united than ever," he said.

Comments
Topics mentioned in this article
Javier Mascherano Barcelona Football
Get the latest updates on India vs Australia Series, check out the India vs Australia Schedule for 2020-21 and Ind vs Aus live score . Like us on Facebook or follow us on Twitter for more sports updates. You can also download the NDTV Cricket app for Android or iOS.