Jamie Vardy scored in 10th consecutive Premier League game as Leicester has only lost one league game this season under new coach Claudio Ranieri, who took over in the summer after the team won seven of its last nine games last season to survive.

Jamie Vardy tied the Premier League record for scoring in consecutive games to help Leicester climb surprisingly to the top of the standings on Saturday, when English football paid tribute to the victims of the Paris attacks. (Read more in Football)

The England international's goal, which set Leicester on its way to a 3-0 win at Newcastle, meant he has scored in 10 straight matches - a feat Ruud van Nistelrooy also achieved for Manchester United across two seasons in 2003.

Leicester only narrowly avoided relegation after a sensational finish to last season, but is upstaging England's major powers after 13 games of this campaign. Manchester City and Arsenal, who started the weekend tied for points at the top, both lost and were also overtaken by Manchester United, which needed a 90th-minute own goal to beat Watford 2-1.

City conceded three goals in the opening 32 minutes and lost 4-1 at home to Liverpool and Arsenal lost 2-1 at West Bromwich Albion, with Santi Cazorla missing a late penalty to tie the game.

The French national anthem was played before all eight Premier League games to honor the 130 people killed in the Paris attacks, with England's top division resuming after the international break amid tightened security.

Vardy picked up where he left off two weeks ago, shrugging off an injury that forced him to withdraw from England duty last week to score in first-half injury time with a low shot inside the near post.

Vardy's scoring run began against Bournemouth on August 29, and the hard-working striker can break Van Nistelrooy's record by scoring against Man United in what is now a top-of-the-table match next weekend.

"I've managed to get there, let's see what happens next week," said Vardy, who was sent a good-luck tweet by Van Nistelrooy ahead of the match. He was playing non-league football only four seasons ago, but is currently the top scorer in the Premier League with 13 goals and reportedly attracting lots of interest from top clubs.

Leicester has only lost one league game this season under new coach Claudio Ranieri, who took over in the summer after the team won seven of its last nine games last season to survive. 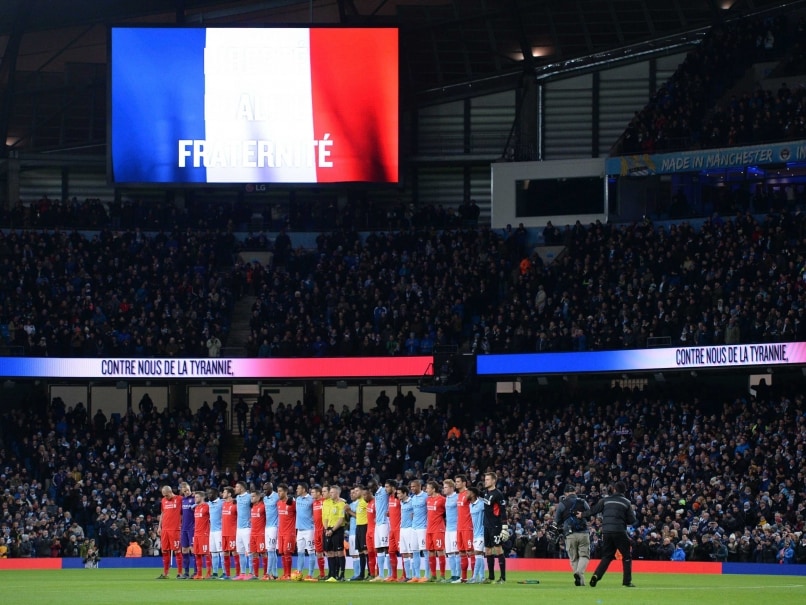 Players from both sides join together as 'La Marseillaise' is played for the victims of the Paris terrorist attacks ahead of the English Premier League football match between Manchester City and Liverpool at The Etihad stadium.

On a day England put on a show of solidarity with France, Olivier Giroud - one of 72 Frenchmen playing in the Premier League - put Arsenal ahead only for James Morrison to equalize before an own goal by Arsenal substitute Mikel Arteta in the 40th minute.

Cazorla missed a penalty in the 84th when he slipped as he was about to shoot to complete a miserable day for Arsenal, who lost two more players - Francis Coquelin and his replacement, Arteta - to injury.

In a stunning first-half display of high pressing and livewire attacking, Liverpool cruised into a 3-0 through Eliaquim Mangala's own goal and goals by Philippe Coutinho and Roberto Firmino. Fit-again Sergio Aguero replied in the 44th for City, but Martin Skrtel's 81st-minute volley clinched a very impressive win for Liverpool and its new manager, Juergen Klopp.

Costa ended a six-game scoring drought in all competitions by running onto a quickly taken free kick from Cesc Fabregas, cutting inside a defender and curling a shot into the far corner in the 64th minute. The win allowed Mourinho some breathing space after consecutive losses to West Ham, Liverpool and Stoke that left Chelsea in 16th place, for the worst start to the season by a reigning Premier League champion.

Stoke beat Southampton 1-0 away and Swansea rallied from two goals down to draw 2-2 at home to Bournemouth.