Italy need to start all over again: Prandelli

Coach Cesare Prandelli admitted on Thursday that Italy need to start rebuilding football in the country from the grassroots level. 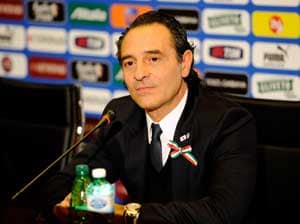 Coach Cesare Prandelli admitted on Thursday that Italy need to start rebuilding football in the country from the grassroots level.

Italy play Slovenia in a Euro 2012 qualifier on Friday looking to maintain their three-point lead over their rivals at the top of Group C.

But ever since Italy's dismal showing at the World Cup in South Africa last June, the focus in the country has been on the lack of emerging talent.

And former Slovenia striker Zlatko Zahovic stuck the knife in earlier this week when he claimed that Italy don't have many good players anymore and that his team should win easily.

Prandelli wasn't hiding from the fact that his squad is lacking in quality, particularly with AC Milan playmaker Andrea Pirlo injured and Manchester City youngster Mario Balotelli frozen out for disciplinary reasons.

"It's a difficult situation as we need to rebuild our football from the base, we need to concentrate on youth, but then again we're Italy so we must always aim for the top level," he said.

"We know all about our difficulties but we haven't started playing yet so we'll see after the match.

"It can happen that a team with great players can be put in difficulty by one that is rich in fantasy."

But Prandelli left no doubt as to where he thinks the problem lies with the country's football, claiming that more needs to be done to develop talented young players.

And he said that Italy could do worse than take a leaf out of their opponents' book, pointing to young Palermo midfield pair Josip Ilicic and Armin Bacinovic, who have both impressed in Serie A this season since joining from Maribor.

"A few years ago Slovenia started down this road (concentrating on youth) that we've fallen off," said Prandelli.

"We need to rediscover our culture and concentrate on youth like we did before and we must work on technique because that's the only way to develop youth."

However he denied that he had suffered the misfortune of taking over the Italy reins at a time when their prospects are bleak.

"I don't think I'm unfortunate at all, I think I'm lucky to be coach of the national team but if others think we're a second rate team, that's their prerogative."

But while many people in Italy despair about the quality of their team, Slovenia coach Matjaz Kek believes it is wrong to dismiss them.

"It wouldn't be right, as everyone in Slovenia is doing, to say that the Italians aren't that good, I would never do that and tomorrow we're up against a footballing super-power," he said.

"It's important for us to play well tomorrow, it will be a good test. I have faith in these lads, they will give their all and even a little more."

"I'm happy with what I've seen during training this week in terms of the commitment and work ethic, which is what this team is based on."

Prandelli, though, is in no doubt that his team are in for a tough night's work.

"It will be a very difficult game because we're up against a team that has great enthusiasm and desire to play," he added.

"Obviously we won't try to compete with Slovenia for possession but we hope to be well organised and to counter quickly."

"They're a compact team with good technical quality and they can create a numerical superiority. Their two forwards are very interesting."

And although he denied he will be keeping an eye on the group C standings, he did admit that this game is crucial to his side's qualification hopes.

"We started this qualification without thinking about the standings and we won't change that," he said.

"We must show consistency but obviously tomorrow's game will be decisive in terms of our aims."

Comments
Topics mentioned in this article
Football Italy
Get the latest updates on ICC T20 Worldcup 2022 and CWG 2022 check out the Schedule, Live Score and Medals Tally. Like us on Facebook or follow us on Twitter for more sports updates. You can also download the NDTV Cricket app for Android or iOS.