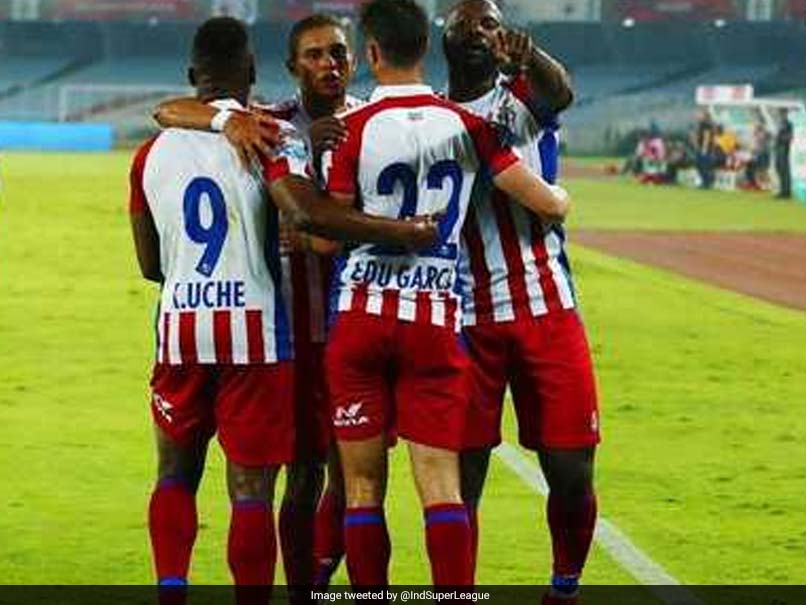 The result saw ATK finish the season sixth with 24 points from 18 matches.© Twitter

ATK had to fight hard for a 2-1 win over Delhi Dynamos FC in the concluding league clash of the Indian Super League (ISL) at the Vivekananda Yuba Bharati Krirangan, in Kolkata on Sunday. After a goalless first-half, Edu Garcia headed ATK into the lead in the 63rd minute. Though Nandhakumar Sekar pulled Delhi Dynamos level in the 72nd, a late winner from Ankit Mukherjee (88th) clinched all three points for the home side. The result saw ATK finish the season sixth with 24 points from 18 matches, while Delhi end up eighth with 18 points.

It was the home team who made the better start to the game with John Johnson going close early from a set-piece. Komal Thatal and Garcia were giving the Delhi defence plenty to think about.

Delhi slowly grew into the game as well with Romeo Fernandes volleying over after some good build-up play in the 13th minute. Mexican playmaker Ulises Davila then saw a shot graze the upright and go wide after a mistake from Ricky Lallawmawma.

However, the intensity of the match declined after the half an hour mark as clear-cut chances just failed to materialise. The second half, though, started on a positive note with Lallianzuala Chhangte making a brilliant run down the left and forcing ATK goalkeeper Arindam Bhattacharya into a save.

But it were ATKwho looked to take the initiative with some attacking intent. Thatal, Garcia and Kalu Uche all were guilty of spurning chances. But they were finally rewarded in the 63rd minute when ex-Dynamos right-back Pritam Kotal whipped a dangerous cross into the box. Garcia, who had snuck between the central defenders, gleefully headed home to notch his third goal of the season.

Delhi hit back after poor defending from ATK in the 72nd minute. Chhangte was released down the left wing and the winger's low ball across the box was not dealt with by the ATK defence. It fell to Nandhakumar who slammed it home.

Delhi then went close to taking the lead when Rene Mihelic just could not apply the finishing touches to a cross from the left wing. And they would pay for that in the 88th minute.

Garcia was the architect this time around. He picked out second-half substitute Ankit Mukherjee with a lovely high ball behind the Delhi defence. All Mukherjee had to do was side-foot a first-time finish past an advancing Francisco Dorronsorro.

ATK saw out the game with ease to end the season with a home win.

Delhi Dynamos FC Indian Super League
Get the latest updates on IPL Auction 2023 and check out  IPL 2023 and Live Cricket Score. Like us on Facebook or follow us on Twitter for more sports updates. You can also download the NDTV Cricket app for Android or iOS.