Intercontinental Cup 2018: When And Where To Watch India vs New Zealand, Live Coverage On TV, Live Streaming Online

On a high after sealing the final spot, buoyant India, led by their inspirational skipper Sunil Chhetri, will look to extend their winning run when they take on New Zealand in the Intercontinental Cup football meet on Thursday. 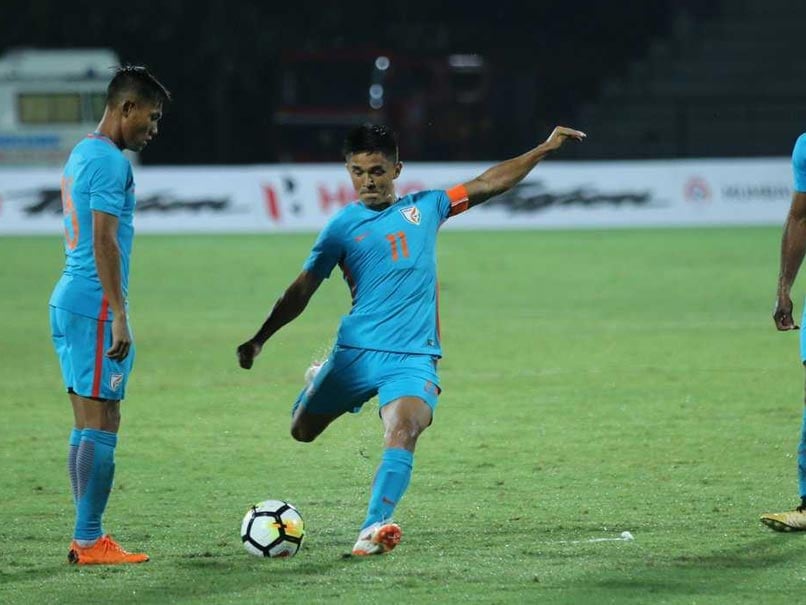 India will look to extend their winning run when they take on New Zealand.© Indian Football

On a high after sealing the final spot, buoyant India, led by their inspirational skipper Sunil Chhetri, will look to extend their winning run when they take on New Zealandin the Intercontinental Cup football meet on Thursday. Chhetri, playing his 100th international game, lit up the Mumbai Football Arena against Kenya two days on Tuesday, scoring a brace as India won 3-0 to seal a spot in the summit clash. Days after his one-and-a-half minute video where he appealed to the fans to come and back the team at the stadium, a full house saw Jeje Lalpekhlua also score a delectable pile-driver off a rebound to cap off another perfect night for the hosts. In the tournament opener, India had mauled Chinese Taipei 5-0 riding a Chhetri hattrick. It rained profusely throughout the first half against Kenya, but the fans -- heeding to his plea -- braved the shower to witness a magical third goal in second-half added time by Chhetri where he chipped the keeper with aplomb from the edge of the box to find the back of the net. The organisers claim that the tickets for Thursday's match as well as Sunday's final have been sold out.

Coach Stephen Constantine might opt to rest a few key players before the final, especially after a physically 45 minutes against Kenya where playing became almost impossible due to thick mud and puddles on the turf. Centre-back Sandesh Jhinghan -- who was adjudged man of the match -- had limped off after an awkward fall. India have a lot of attacking options up front with the likes of Balwant Singh likely to start on Thursday if Chhetri is rested. Coming to the Kiwis, striker Myer Bevan is one to watch out for. New Zealand coach Fritz Schmid has said that the game would be a big challenge. The game will also be special for Jeje Lalpekhlua as it will be his 50th match in national colours.

When will India vs New Zealand match be played?

Where will India vs New Zealand be played?

The India vs New Zealand match will be played at the Mumbai Football Arena, Mumbai.

How do I watch India vs New Zealand match live?

The India vs New Zealand match will be telecast live by the Star Network.

What time does India vs New Zealand match start?

The live telecast of the India vs New Zealand match will begin at 8 pm IST.

Where can you follow India vs New Zealand match online?

The India vs New Zealand match will be streamed live on Hotstar. For live updates, you can follow sports.ndtv.com.

India Sunil Chhetri Jeje Lalpekhlua Football India vs New Zealand, Match 5
Get the latest updates on IND vs NZ 2021, check out the Schedule and Live Score . Like us on Facebook or follow us on Twitter for more sports updates. You can also download the NDTV Cricket app for Android or iOS.