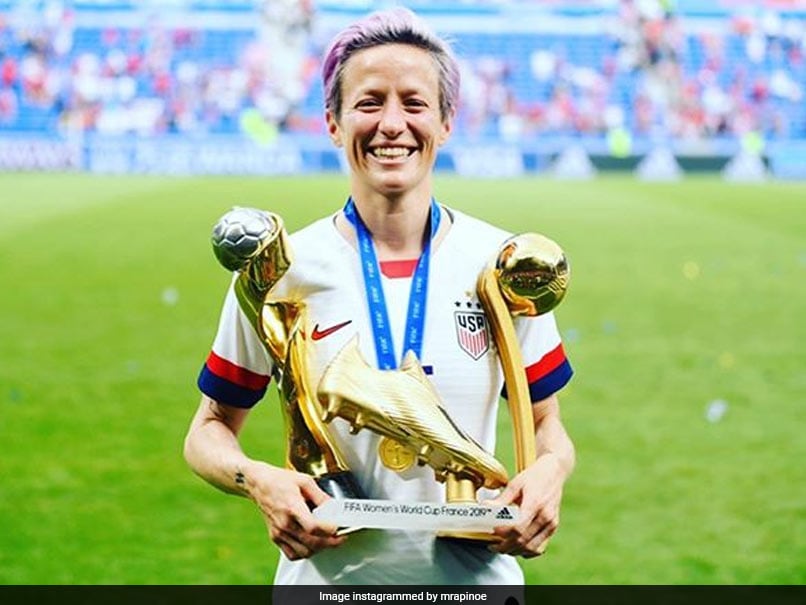 Maymol Rocky said that she had once met Megan Rapinoe during the 2019 FIFA Women's World Cup.© Instagram

Indian women's football team head coach Maymol Rocky has urged players to develop an attitude towards the game similar to the 2019 FIFA World Cup Golden Ball and Golden Boot Award winner USA's Megan Rapinoe. In a chat with AIFF TV, Maymol informed that she had once met Rapinoe during the 2019 FIFA Women's World Cup in France. "I had a small chat with Megan. Her attitude was simply amazing. She is one of the best players in the game. But she not arrogant or egoistic at all. But she had all the attitude around her. She has put in all the hard work to get to where she is today," Maymol said.

"I tell my players that we should also have that same kind of attitude. She's an absolute role model for young girls out there. I had gone there with my mentor as a part of the FIFA programme. Watching the matches, I was just thinking about how it would feel had our team been out there on the pitch. It would have been unforgettable. It is going to be just that for the U-17 girls next year. I will, of course, be there to cheer them from the stands," she added.

She further explained, "After I came back, some of the players messaged me, saying they would have loved to come along with me. I told them it's not about just going there. It's about earning the right to be there. It's something that needs to be achieved."

"As the senior team coach, I''m really looking forward to the U17 WWC. Surely, we will get some players for the Asian Cup 2022. When the base becomes stronger, scouting becomes tougher. We will get more players for every position," she maintained.

Maymol has been one of the leading scouts for women's football in India - preferring to be there herself in the domestic competitions. "AIFF has a wide scouting system in place. That helps a lot in terms of finding players from different areas. But I also like to do myself for which I prefer -- be it U-17 tournaments, Khelo India, National or State Championships," she said.

She mentioned that the likes of Sweety Devi, Sandhiya Ranganathan and Manisha Kalyan - some of the youngsters whom she scouted and are not part of the Indian national team.

"I make it a point for all national team players and aspirants to be part of the IWL. Not only do they play against national players, but the youngsters get to test themselves against the seniors," Maymol concluded.