Kerala Blasters scored through Josue Prieto, Kervens Belfort and Mohammed Rafique with Antonio German's miss counting for nothing as Kerala won 3-0 in penalties. 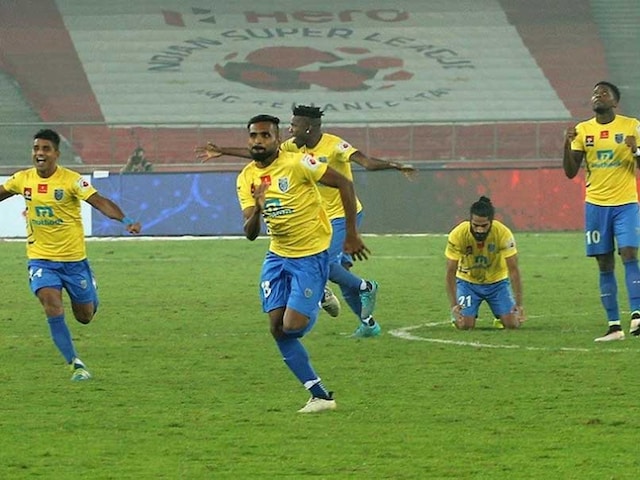 In a fantastic and enthralling game of football witnessed in a semi-final, second leg at Jawahar Lal Nehru Stadium in New Delhi, Kerala Blasters defeated Delhi Dynamos via penalty shoot out and set up a title clash with Atletico de Kolkata (ATK) on December 18.

The hosts were leading 2-1 at the end of the regulation time. But with Kerala having won the first leg 1-0, the teams were locked 2-2 on aggregate.

With both teams unable to score over 30 minutes of extra-time, the match went on to the penalty shoot-outs. Kerala upstaged Delhi with 3-0 to enter the summit clash in Kochi.

Earlier in regulation time, Marcelinho Pereira (21st minute) and Ruben Rocha (45th minute) scored for Delhi Dynamos, while Duckens Nazon was the goal-scorer for Kerala Blasters in the 24th minute. Delhi led 2-1 at half time.

Meanwhile, ATK had reached the final on goal aggregate after playing out a hard-tackling, goalless draw with Mumbai City FC in the second leg semi-final at the Mumbai Football Arena on Tuesday.

Comments
Topics mentioned in this article
Kerala Blasters FC Delhi Dynamos FC Atletico de Kolkata Florent Malouda Football Indian Super League
Get the latest Cricket news, check out the India cricket schedule, Cricket live score . Like us on Facebook or follow us on Twitter for more sports updates. You can also download the NDTV Cricket app for Android or iOS.