It is a soccer club that few have heard of, from a corner of the former Soviet empire even fewer could easily locate: F.C. Sheriff Tiraspol, champions of Transnistria. The club was started by a former K.G.B. agent, and it plays in a place where smuggling is rampant and statues of Lenin still stand revered. 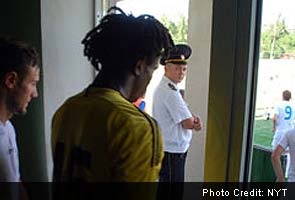 It is a soccer club that few have heard of, from a corner of the former Soviet empire even fewer could easily locate: F.C. Sheriff Tiraspol, champions of Transnistria. The club was started by a former K.G.B. agent, and it plays in a place where smuggling is rampant and statues of Lenin still stand revered.

Its fans are a bawdy, often violent bunch. Its officials treat basic details of the club's operations - even the recent successes that have brought it to the verge of joining Europe's soccer elite - like classified material.

"With Transnistria, there is always secrets," says Mihai Sitnic, a soccer journalist for Fotbal.md, a Web site in Moldova. "They don't want anybody to know about this club. Everything is hidden."

Back when the Soviet Union was collapsing, Transnistria, a tiny, secretive, 15-mile-wide self-declared republic, was fighting a war of independence with Moldova, a former part of the Soviet state between Ukraine to the east and Romania to the west. Transnistria, which leaned toward Russia, did not want to be part of the new Moldovan nation.

That war ended in 1992 in a stalemate. Since then, Transnistria has followed its own Soviet-style path, leaving the enclave adrift from almost all of the rest of the world and firmly under the wing of the Russians, who maintain a military base here. It has its own border, currency (the Transnistrian ruble, virtually worthless outside the territory) and police. Its flag still bears the hammer and sickle.

But somehow, soccer has managed to bridge these fault lines. Because Transnistria is recognized by virtually no one, including European soccer's governing body, F.C. Sheriff begrudgingly plays in the Moldovan league, despite all the enmity. And maddeningly for Moldova, it keeps winning. F.C. Sheriff has won 11 of the last 12 Moldovan league titles.

When the Transnistrians show up at soccer games, it's often not pretty. Sheriff fans scream "Russia! Russia!" and insult the Moldovans, who these days tend to look west toward Europe and away from Russia. But winning in the Moldovan league has given the team access to one of the biggest prizes in the soccer world - participation in the European Champions League.

In recent weeks, F.C. Sheriff played a group of qualifying matches, hoping to reach the group stage of the Champions League, where it would be matched against European heavyweights like Barcelona and Chelsea. F.C. Sheriff fell short, losing to Dinamo Zagreb of Croatia. But is still competing in the Europa League, a second-tier but still prestigious competition, where it will play Thursday against the noted French team Olympique de Marseille.

F.C. Sheriff was formed in 1997 by Viktor Gushan, a former K.G.B. officer, and is embedded in the private economy in Transnistria. Its distinctive black-and-yellow sheriff's badge can be found on everything from supermarkets to gas stations.

The money has helped F.C. Sheriff become the richest club in the Moldovan league, allowing it to scoop up talented young players in Africa and nearby Serbia. Its stadium is considered one of the best in Eastern Europe, a modern building with a training stadium next door and a hotel with accommodations that would not seem unfamiliar to the best teams in Europe.

"I don't like the pitch here," Aleksandar Pesic, an under-21 Serbian international who recently signed for F.C. Sheriff, said before a recent game on a decrepit soccer field in the village of Ghidighici, three miles outside the Moldovan capital, Chisinau. "But you should see the pitch at Sheriff in Tiraspol. It's perfect."

The disparity in wealth was clear as the game proceeded. F.C. Sheriff beat the home team, Academia, 4-1, after bringing on two big-money foreign signings, one of them Pesic, who scored.

"I enjoy living there," F.C. Sheriff's Serbian coach, Milan Milanovic, who has since been fired, said coyly after the match, referring to Transnistria. "The facilities are great." He added, "I think, in Europe, I have never seen such good places like this."

Beyond that, though, nobody wanted to talk about the club, from a nation where even 20 years after the war of independence with Moldova, phone calls between the two capitals do not connect, no matter that the team regularly crosses the border to play Moldovan teams.

"Every club in Europe wants to promote his product to the world, but when we call F.C. Sheriff, they won't tell us anything," said Sitnic, the Moldovan journalist.

The few home supporters for Academia had long gone when the 30 fans of F.C. Sheriff left the stadium grounds singing their Russian songs. They boarded a new yellow-and-black bus for the journey back home.

Ask for an interview with Gushan, Sheriff's guiding force, and you will be told it will not happen.

"I am sorry, but no one from the club will speak to you," said Vadim Kolchev, the club's friendly press attache.

Soviet-era suspicion and paranoia persist in the Transnistrian capital, where no one - not fans, players, or the man on the street - will talk on the record. Even the woman playing accordion near Lenin's statue did not want to talk about life. Instead, she squeaked her musical box shut and sat looking the other way.

Gushan's reticence might be explained by the slightest hint of change in Transnistria. In presidential elections last December, the incumbent, Igor Smirnov, a strongman who had been president since Transnistria's declaration of independence in 1990, was voted out of office and replaced by Yevgeni Shevchuk, a young lawyer and possible reformer.

Gushan's Sheriff monopoly had flourished under Smirnov. According to a 2010 United States Department of State report, "The company also effectively controlled the Obnovlenie (Renewal) Party, which held a majority of seats in the region's legislature."

But Renewal is also Shevchuk's party. According to the Transnistrian government's Web site, Shevchuk was also once deputy director of Sheriff. But don't try to sort all this out.

"We are speaking about the football, not about the money, not about the revenue," Kolchev told reporters after F.C. Sheriff advanced to play Dinamo Zagreb in the Champions League qualifier by defeating the Armenian team Ulisses before almost 10,000 home fans, many of them flying Russian flags.

Comments
Topics mentioned in this article
Sheriff Tiraspol Football
Get the latest updates on ICC T20 Worldcup 2022 and CWG 2022 check out the Schedule, Live Score and Medals Tally. Like us on Facebook or follow us on Twitter for more sports updates. You can also download the NDTV Cricket app for Android or iOS.