Barcelona defender Gerard Pique says being constantly followed by gossip media since he started dating Colombian pop star Shakira has been trying but despite this, he and the singer are "very happy". 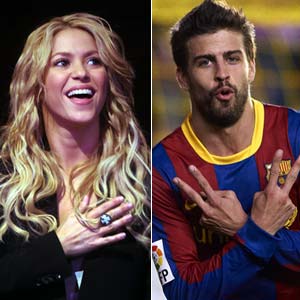 Barcelona defender Gerard Pique says being constantly followed by gossip media since he started dating Colombian pop star Shakira has been trying but despite this, he and the singer are "very happy".

The 24-year-old former Manchester united player met the singer last year while shooting the video to her song "Waka Waka (This Time for Africa)" - the official track of the 2010 World Cup in South Africa, which was won by Spain.

"They travel in a pack and it is a question of getting used to this new situation where you are being followed in the street. I try to take it in my stride," he said in an interview published in Spanish sports daily Mundo Deportivo on Thursday.

In January Shakira, 34, announced the end of her 11-year relationship with Argentine lawyer Antonio de la Rua and shortly after gossip magazines began speculating that she was dating Pique.

The singer confirmed her romantic relationship with the Spanish international footballer last month through a message posted on her Twitter account that was accompanied by a photo of the smiling pair.

She has since posted other messages on Twitter where she praises Pique.

"She simply wants to show that we are in a good place, that I am very happy and so is she, and that's all," Pique said when asked about the singer's Twitter messages.

Comments
Topics mentioned in this article
Football Shah Rukh Khan Gerard Pique Barcelona Spain
Get the latest updates on Fifa Worldcup 2022 and check out  Fifa World Cup Schedule, Stats and Live Cricket Score. Like us on Facebook or follow us on Twitter for more sports updates. You can also download the NDTV Cricket app for Android or iOS.