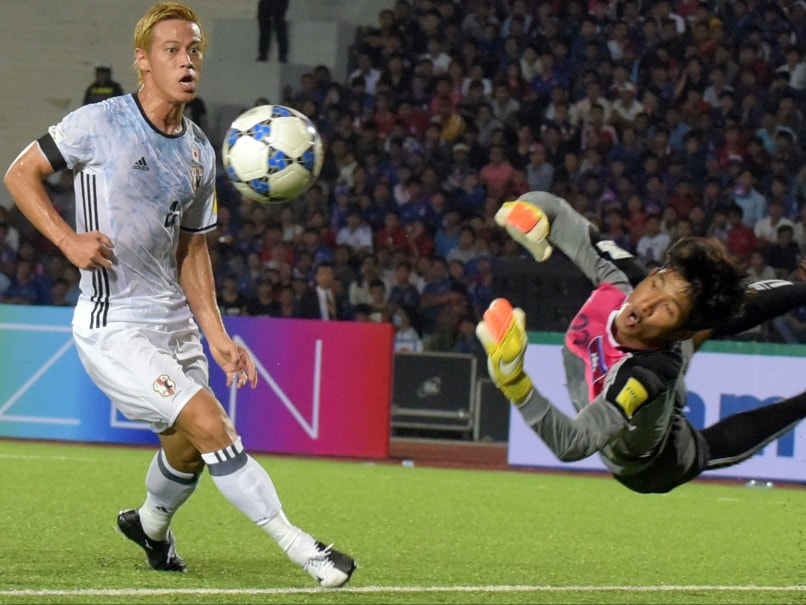 Apparently surplus to requirements at the San Siro, Honda has been buried deep on Milan's bench after falling out with Serbian coach Sinisa Mihajlovic, but the 29-year-old on Thursday denied he had handed in a transfer request.

"I will tell you one thing clearly: I won't leave Milan of my own accord," Honda told Japan's Nikkan Sports daily. "I came to Milan with unshakeable determination and unless they tell me they don't want me, I'm going nowhere. I won't run away."

Honda's plight at Milan, where he has cut a forlorn figure this season, has alerted English Premier League clubs Everton and Tottenham, with West Ham United also being linked to the Japan playmaker.

But Honda, who has helped the Blue Samurai to a best-ever five successive World Cup qualifying wins, remained defiant about his chances of reviving his club career.

"Of course I have to accept my disappointing performances," said Honda, who joined Milan from CSKA Moscow in 2013. "But I have confidence of fighting back. I know it will be difficult to win back my place but I haven't given up.

"It's more difficult than I imagined it would be at Milan," added the bleached-blond attacking midfielder. "But of course I won't give up."

Italian media have reported that Honda has asked to be allowed to go, while Mihajlovic said those who were frustrated were "free to leave" after Honda recently hit out at the Serb by saying it was pointless blaming the players for the team's current slump.

Honda did, however, admit to being frustrated at his failure to force his way into Mihajlovic's plans.

"I don't look at everything through the eyes of a footballer," said Honda. "As a person, I think about how Keisuke Honda walks on. I understand people saying (Milan) doesn't suit my style, or I'm not playing, I should move to a club that wants me.

"I get that. I happen to be a footballer, yes, but as a person I think about living my life in a way that doesn't embarrass my fans."

Comments
Topics mentioned in this article
Keisuke Honda Football
Get the latest updates on ICC T20 Worldcup 2022, check out the Schedule and Live Score. Like us on Facebook or follow us on Twitter for more sports updates. You can also download the NDTV Cricket app for Android or iOS.