A 7000-strong crowd cheered their team as Rangdajied created many opportunities and dominated the proceedings in the first half. 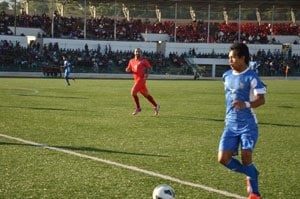 Churchill Brothers FC came from behind to hold I-League debutant Rangdajied FC 1-1 in a thrilling fourth round I-League encounter played at the J N Stadium here on Thursday.

The hosts were all fired-up after they held Dempo FC 2-2 last week and played aggressively, but were unlucky not to take home full points.

Captain Eugeneson Lyngdoh shot a dead right footer into the left flank, netting the first and only goal for the home side in the 25th minute.

A 7000-strong crowd cheered their team as Rangdajied created many opportunities and dominated the proceedings in the first half.

Earlier, in the first two minutes, Gadkari's right-footer went a little too wide and in the dying minutes of the first half, Eugeneson's left-footer was blocked from within the box by Churchill defenders.

Hugo Alves' free kick just outside the box hit the crossbar in the 55th minute and Rangdajied's keeper Surjay Kumar unleashed a header from Balwant in the 66th minute.