Hulk's first half season with the club has been turbulent. His high salary sparked a rebellion among Russian players and he has had frequent rows with the team management. 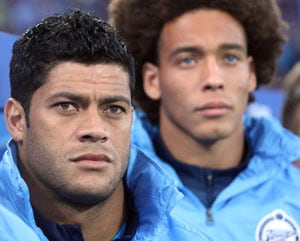 Brazilian striker Hulk says he is learning Russian to improve his relations with team-mates at Zenit St Petersburg after a turbulent start to his career at the club.

Hulk arrived at Zenit from Porto in September on a reported transfer fee of 60 million euros to spearhead the club's European campaign, but he has yet to fully justify his price tag.

"Last year I arrived at Zenit when the season was in full swing and had little time and chance to find a common language with my teammates."

That's why I'm trying to improve my rapport with my colleagues here at the training camp. I think we've already made good progress."

Hulk insisted he wanted to see out the five-year contract he had signed and that he believed a working knowledge of Russian would be helpful to that end.

"To learn Russian -- is one of of my main priorities," Hulk said. "My teammates (Portugal's Miguel) Danny and (Belgium's Nicolas) Lombaerts are already able to give interviews in Russian."

"I also want to speak Russian fluently as I have a long-term contract with the club and I'm am going to see it through."

Hulk's first half season with the club has been turbulent. His high salary sparked a rebellion among Russian players and he has had frequent rows with the team management.

On the pitch, Hulk scored just three goals in 11 league matches for Zenit, two fewer than the yellow cards he picked up in the same period.

On top of that, Hulk was involved in a row with Zenit's Italian manager Luciano Spalletti over his substitution in a Champions League match, threatening to quit the club in the January transfer window before patching things up.

The Russian league resumes on March 9 after the winter break. Zenit are currently third in the league table with 38 points from 19 matches, five behind the leaders CSKA Moscow.

Comments
Topics mentioned in this article
Football Zenit St. Petersburg
Get the latest updates on ICC T20 Worldcup 2022 and CWG 2022 check out the Schedule, Live Score and Medals Tally. Like us on Facebook or follow us on Twitter for more sports updates. You can also download the NDTV Cricket app for Android or iOS.