Football club Bury, the first team to be expelled from the English Football League in over two decades, suffered a further blow Wednesday when they were kicked out of the FA Cup 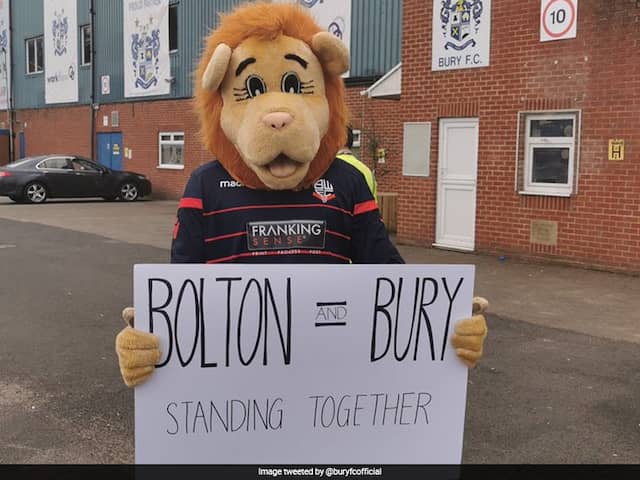 Historic football club Bury became the first team to be expelled from the EFL.© Twitter

Historic football club Bury, the first team to be expelled from the English Football League in over two decades, suffered a further blow Wednesday when they were kicked out of the FA Cup. The once-proud club that only a few months ago were celebrating promotion to the third tier, were turfed out of the league late Tuesday when a takeover bid fell apart shortly before the 1600 GMT deadline set by league administrators. The club from northwest England are the first to be expelled from the league -- comprising all the divisions below the top-tier Premier League -- since Maidstone United in 1992.

On Wednesday, a further blow fell on bitter fans awaking to the stark realisation that efforts to keep the club afloat had failed.

"Following on from their expulsion from the English Football League, Bury FC will no longer be able to participate in the FA Cup for the 2019/20 season," read an FA statement.

"If the club re-forms we look forward to them applying to make an application to The Football Association to re-join league competition further down the English football pyramid from the 2020/21 season."

Bury's historic rivals Bolton -- one of the founders of the Football League but who have been in administration since May -- won some breathing space on Tuesday when they were given 14 days to find a buyer.

For Bury, though, the bell has tolled on their time in the Football League, ending over 100 years of participation which yielded two FA Cups and produced players like former Manchester City and England great Colin Bell.

Ironically Bury, who become the first FA Cup winners to be ousted from the league, and Bolton were due to face each other in a televised live match on Sunday week.

Bury are the first team to be expelled from the third tier of English football. The remaining 23 teams will complete the season and only three instead of four teams will be relegated.

A BBC journalist at the club's Gigg Lane ground said that on hearing the news fans burst into tears with some so upset they were "crouching down to the floor".

"I understand this will be a deeply upsetting and devastating time for Bury's players, staff, supporters and the wider community," said EFL executive chair Debbie Jevans.

Jevans words of sympathy were dismissed by Bury North MP James Frith, who has earned praise for his efforts to save the club, inferring Bolton had been treated better.

"I feel Bury is the victim ... and those left to pick up the pieces are the town and the community," Frith told BBC radio.

"Yes we will rise again and keep the faith but we shouldn't be at this point."

The writing had been on the wall for Bury after a rollercoaster of a day for fans and employees alike, when C&N Sporting Risk withdrew their takeover bid offer to Steve Dale, who had bought the club last December for a single pound.

"This should never have happened," he said. "If you thought you could not move this club forward in a positive way you should never have taken over because you've literally destroyed lives, because that's what this football club meant to so many fans."

Meanwhile Bolton has been thrown a late lifeline and fans -- some of whom are old enough to have attended two League Cup finals (1995/2004) -- gathered late Tuesday round the statue of their greatest player, the late former England forward Nat Lofthouse known as "The Lion of Vienna".

Tuesday would have been Lofthouse's 94th birthday.

Comments
Topics mentioned in this article
Bury Football
Get the latest Cricket news, check out the India cricket schedule, Cricket live score . Like us on Facebook or follow us on Twitter for more sports updates. You can also download the NDTV Cricket app for Android or iOS.
Advertisement