The German football returns behind closed doors following a two-month suspension due to the coronavirus pandemic. 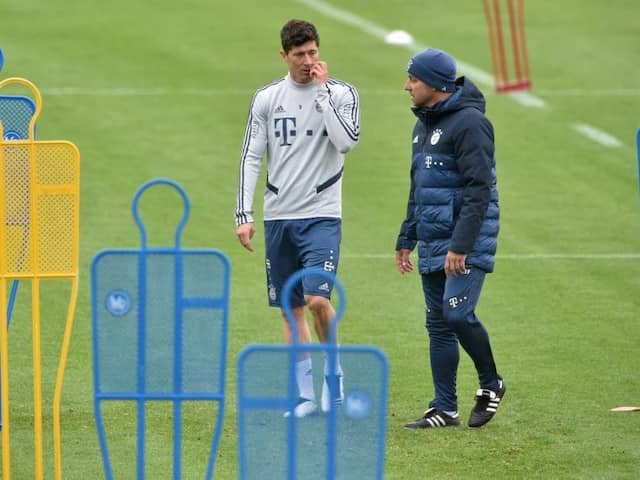 Bayern Munich boss Hansi Flick admitted on Friday that he is unsure whether his players are match fit ahead of the Bundesliga restart this weekend. Defending champions Bayern hold a four-point lead ahead of Sunday's game at Union Berlin, as German football returns behind closed doors following a two-month suspension due to the coronavirus pandemic. Bayern, like Germany's other clubs, only received the go-ahead to resume full team training last week.

"We don't know if the team can hold out over 90 minutes," said Flick. "We have trained well and played three matches of 20 minutes each last Sunday.

"They were played at a very high intensity, but we don't know clearly where we stand.

"We have to just deal with the situation."

Flick welcomed the decision by the German league to approve plans to allow five substitutions instead of the usual three, but hopes teams do not abuse the temporary rule change.

"I have two more options, so I'm very happy, especially in this situation," Flick said. "I only hope it is not used to waste time.

"We will use it to replace a tired player. In the weeks with a lot of games it's great."

Bayern chairman Karl-Heinz Rummenigge claims the Bundesliga will have a global audience of "billions around the world" this weekend, with the English, Spanish and Italian leagues still suspended.

"More than 200 countries will be watching," Flick said. "So we have an enormously large audience and we want to deliver a top performance.

"The whole world will be looking at Germany, to see how we get it done.

"If we manage to ensure that the season continues, it will send a signal to all leagues."

A leading German sports doctor has said that footballers could potentially have their careers ended by lung damage if they contract the coronavirus.

Flick said his players have the chance to sit out games, but only the injured trio of Philippe Coutinho, Corentin Tolisso and Niklas Suele are unavailable for Sunday.

"I'm not afraid for my players. We raised the issue," he said.

"If a player had doubts, he could have decided not to play -- without consequences. But they are all in, except for those who are injured."

Bayern are bidding for an eighth consecutive league title, but could have their lead trimmed to one point by kick-off if second-placed Borussia Dortmund beat Schalke in Saturday's Ruhr derby.

"We have nine match days -- it's a power season, a small tournament," he said, before acknowledging the threat posed by a Union outfit who have already beaten Dortmund and Borussia Moenchengladbach at home this term.

"(We will face) the same thing as if they had their fans behind them -- an aggressive team with a direct approach to goal."