Messi was forced out of the game against Athletico in the second half, leaving Barca to struggle on with 10 men, which they did with great effect. 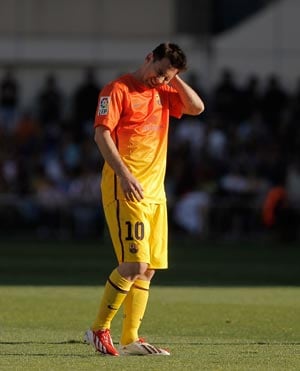 Barcelona have confirmed that striker Leo Messi will miss the rest of the season as a result of the muscle injury which forced him out of his side's 2-1 win away over Atletico Madrid.

The fact that Messi's injury is a relapse of the hamstring problem, which he originally suffered in the quarter-final of the Champions League April 2 and which has troubled him ever since, is a key factor in the decision made by the club Monday, reports Xinhua.

As a result, Messi will miss Barcelona's last games of the season, which are at home to Valladolid and Malaga and away to local rivals Espanyol.

Messi was forced out of the game against Athletico in the second half, leaving Barca to struggle on with 10 men, which they did with great effect, overturning a 0-1 deficit thanks to a goal from Alexis Sanchez and an own goal with 10 minutes remaining.

The Catalans are already assured of the Primera Liga title as of this weekend and they currently hold a 10-point lead over second placed Real Madrid with a game in hand.

Messi has been vital once again for Barca this season, playing 48 matches for his club (not counting internationals with Argentina) and scoring 58 goals in all competitions, with 46 of them coming in the league.

With the league won there is no need to rush Messi back to fitness and the player will now be able to recover slowly and hopefully return fresh at the start of the 2013-14 campaign, which promises to be a long season given that it begins in mid-August in Spain and ends with the 2014 World Cup, which will be held in Brazil.

It is not yet known whether he will be able to play for Argentina in their World Cup qualifying matches in early June. Argentina entertain Colombia, June 4, and away to Ecuador four days later.