Gerrard, Reina should be ready: Dalglish

Liverpool captain Steven Gerrard and goalkeeper Pepe Reina should both recover from injury in time for the opening of the Premier League season, manager Kenny Dalglish said on Monday. 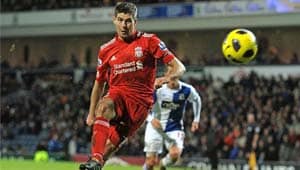 Liverpool captain Steven Gerrard and goalkeeper Pepe Reina should both recover from injury in time for the opening of the Premier League season, manager Kenny Dalglish said on Monday.

Gerrard is recovering from a groin operation and has not played since March, while Reina had a double hernia operation last month. Both were left out of Liverpool's Asian tour to China, Malaysia and Singapore.

"He has made fantastic recovery from the operation he had towards the end of last season. And he is just getting the last couple of niggles away and he should be fit to start of the season for us," Dalglish said of Gerrard.

The 31-year-old midfielder started only 20 of 38 Premier League matches last season, compared to at least 30 in each of the previous five campaigns.

Liverpool opens the season at home against Sunderland on Aug. 13.

Dalglish also said Reina is not fit at the moment but should be ready for the start of the season.

Dalglish is trying to build on the turn around in Liverpool since he took over in January from the fired Roy Hodgson. He signed a three-year contract as Liverpool manager in May, vowing to bring the good times back to the fallen English giant.

Liverpool finished sixth last season, and out of Europe. The club won the last of its 18 English titles in 1990, and was forced to watch Manchester United celebrate its 19th championship in 2011.

Dalglish said an immediate return to Europe is the aim.

"Next year, without European football, we just hope it is an absolutely one-off. Because I think it is important we are involved in European football," he said. "The club's supporters love to see it play in European competitions. But we haven't got there because the performances last season weren't good enough. Hopefully we can correct that this year."

New signing Charlie Adam was also upbeat on the new season after signing from demoted Blackpool.

"And it is a step in my career that I am looking forward to," the 25-year-old midfielder said. "I want to learn. There are some of the best players in the world at the club, so if I can learn from them and I am going to improve as a player."

Comments
Topics mentioned in this article
Football Liverpool Barcelona Arsenal Pepe Reina Steven Gerrard Fernando Torres Alex Ferguson Charlie Adam
Get the latest Cricket news, check out the India cricket schedule, Cricket live score . Like us on Facebook or follow us on Twitter for more sports updates. You can also download the NDTV Cricket app for Android or iOS.