Germany defenders Marcel Schmelzer and Jerome Boateng have both been ruled out of Wednesday's friendly match against the Netherlands in Amsterdam. 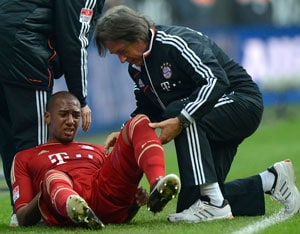 Germany defenders Marcel Schmelzer and Jerome Boateng have both been ruled out of Wednesday's friendly match against the Netherlands in Amsterdam.

The German Football Federation says Schmelzer had a recurrence of a metatarsal injury in his right foot. The same injury forced the Borussia Dortmund player out of Germany's 4-4 draw with Sweden in a World Cup qualifier last month.

Boateng is out because of a left groin injury sustained in Bayern Munich's 2-0 win over Eintracht Frankfurt on Saturday.

Bayern coach Jupp Heynckes confirmed on Sunday that Boateng tore a muscle and that the 24-year-old player "will definitely be out for two or three weeks."

Boateng has played 28 times for Germany, while Schmelzer has nine caps.

Germany coach Joachim Loew did not immediately call up any replacements.

Comments
Topics mentioned in this article
Football Jerome Boateng Netherlands Germany
Get the latest updates on IPL 2021, IPL Points Table , IPL Schedule 2021 , live score . Like us on Facebook or follow us on Twitter for more sports updates. You can also download the NDTV Cricket app for Android or iOS.