Germany's twisted his ankle during the team's 6-1 win over Armenia in a friendly match ahead of the FIFA World Cup. Scans revealed he has a torn ligament. 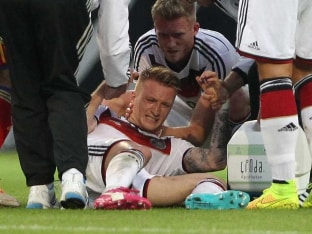 Reus was rushed to hospital after twisting his left ankle just before the half-time break in Mainz and a scan revealed the extent of the injury.

The 25-year-old was rushed to hospital after twisting his left ankle just before the half-time break in Mainz and a scan revealed the extent of the injury.

The German Football Association (DFB) have said a decision will be made as to whether the Borussia Dortmund star flies to Brazil with the squad, who leave at 22:00 local time from Frankfurt for their camp at Porto Seguro on Saturday.

With seven goals in 21 appearances for Germany, Reus' withdrawal would be a bitter blow for the Dortmund winger.

He has been in good form this season and is central to head coach Joachim Loew's brand of attacking football.

"Marco has been in great form and a bad injury would be very bitter," said Germany captain Philipp Lahm before the diagnosis.

Germany open their Group G campaign against Portugal in Salvador on June 16 and also face Ghana and the USA in the first round.