Marco Reus also missed the World Cup which Germany won after injuring the same left ankle in their final warm-up game against Armenia and had only returned to action recently. 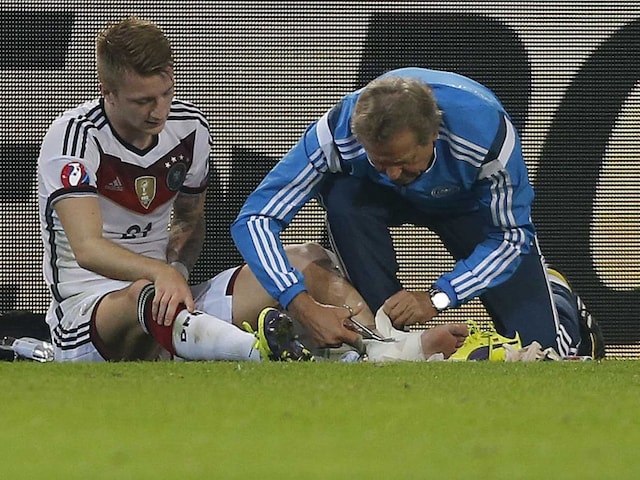 Marco Reus getting medical treatment on his ankle during Germany's Euro 2016 qualifiers.© AP

Germany midfielder Marco Reus has been ruled out for at least four weeks after re-injuring his left ankle during Sunday's 2-1 Euro 2016 qualifier win over Scotland, his club Borussia Dortmund confirmed on Monday.

"Team doctor Markus Braun on Monday diagnosed a partial tear and stretching of ligaments. The club expects the player to undergo a rehabilitation programme of four weeks," Dortmund said in a statement.

The 25-year-old also missed the World Cup which Germany won after injuring the same left ankle in their final warm-up game against Armenia and had only returned to action recently.

He will miss Dortmund's first two Champions League matches -- at home against Arsenal on September 16 and at Anderlecht on October 1.

Reus's latest injury blow resulted from a tackle with Scotland's Charlie Mulgrew in extra time of Sunday's qualifier in Dortmund.

The midfielder had only returned to action in a German Cup tie in mid-August, much faster than the three months which doctors had estimated initially.

The Scotland game was his second appearance for Germany four days after a 4-2 friendly defeat by Argentina.

Comments
Topics mentioned in this article
Marco Reus Germany Football
Get the latest Cricket news, check out the India cricket schedule, Cricket live score . Like us on Facebook or follow us on Twitter for more sports updates. You can also download the NDTV Cricket app for Android or iOS.