Bayern utterly dominated the game, with 35 efforts on goal - 22 on target - compared with none from the visiting Czech champion. 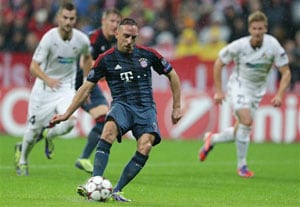 Bayern utterly dominated the game, with 35 efforts on goal - 22 on target - compared with none from the visiting Czech champion.

"Bayern were a significantly better side tonight and if it had not been for (goalkeeper Matus) Kozacik, the result would have been even crueler for us," Plzen coach Pavel Vrba said. "Our ceiling was probably the qualification to the group stage which we handled well, but the difference between the top teams and average, or under average ones, is great and the gap is growing."

Yet, despite a host of early chances, Bayern needed a penalty from Ribery to break the deadlock in the 25th minute. Plzen defender Roman Hubnik conceded the spot kick for a foul on Arjen Robben after the Dutch winger ghosted past two players on his way into the box.

David Alaba made it 2-0 in the 37th, when he controlled Mario Mandzukic's header on his chest, took it past a defender with his left thigh, and unleashed a shot past Kozacik with his right boot.

Such was the home side's dominance that Ribery's memorable second, when it came in the 61st, seemed inevitable. Robben and Mandzukic combined to set up the Frenchman, who eluded two defenders and then dinked the ball over the goalkeeper.

Mario Goetze came on as a substitute and immediately set up Bastian Schweinsteiger for Bayern's fourth in the 68th, and Robben picked him out with a deep cross to complete the rout in injury time.

Since joining from Bundesliga rival Borussia Dortmund in the offseason, Goetze's opportunities to shine for Bayern have been hampered by injury.

"I feel that my fitness is constantly improving and I'm happy about my goal," said Goetze, who also hit the crossbar.

Man of the match, however, was Ribery with a performance worthy of his European Footballer of the Year award.

"Franck plays with an unbelievable joy. The things he does with the ball are at times like (Italian acrobat and performer Enrico) Rastelli," said Bayern president Uli Hoeness.

It was Bayern's eighth consecutive Champions League win - a club record - and the German champion is three points clear at the top of Group D after three wins from three. Bayern can ensure progress from the group with a win in the return game at Plzen in two weeks' time.

"You can always play better," Bayern coach Pep Guardiola said. "The main thing is to improve in the Bundesliga. Our four games in Europe (including Super Cup) were very good up to now but even there, there's room for improvement."

Comments
Topics mentioned in this article
Football Xavi Lionel Messi Jaume Franck Ribery Arjen Robben Patrice Evra Bayern Munchen France Viktoria Plzen
Get the latest updates on IPL Auction 2023 and check out  IPL 2023 and Live Cricket Score. Like us on Facebook or follow us on Twitter for more sports updates. You can also download the NDTV Cricket app for Android or iOS.