The team comprising children of sex workers from Kolkata will participate in week-long football tournament known as Dana Cup in Denmark, which will be held in the last week of July 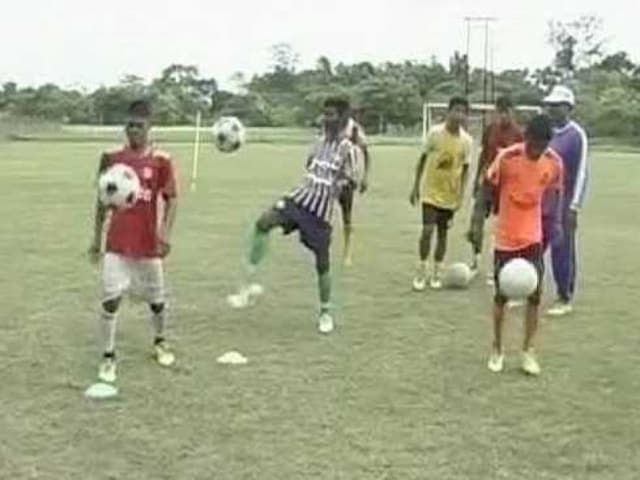 The football team members during a practice session ahead of international football tournament, known as Dana Cup.© NDTV

For the first time in the history of Indian sports, a team comprising children of sex workers from Kolkata has been invited to play the International Youth Football tournament, the Dana Cup. At least 16 promising footballers from the Durbar Sports Academy are raring to go, but lack of sponsors is proving to be a major stumbling block.

Seen practicing in Baruipur in South 24 Parganas district of West Bengal, these children are putting in a lot of hard work. They hope to be able to make it to Denmark, wherein the tournament will be held in the last week of July. The young footballers will compete against teams from 45 countries. After all, they have dreamt to become champions.

"We are the only Under-16 team from India to be participating in the tournament, hence the mantle of India's reputation is on our shoulders," Supriyo Ghosh, captain of Durbar Sports Academy team, told NDTV.

"We have to fulfill our responsibility. We have to go there, play well and return as champions," he added.

Another team member, Yakub Ali, said, "We have an opportunity to represent India. We will definitely become champions but we have a finance problem. If someone helps us financially, we can definitely go there and become champions and make India proud."

However, lack of funds is major roadblock for the week-long tournament. The travel expenses are said to be around Rs20 lakh.

"We have a few problems. After the two practice session we cannot give them enough nutrition as we are a small organisation and do not have much money. We don't have a sponsor for this and our plans to go and play and it will cost a lot of money," Biswajit Mazumdar, coach, said.

But now there is hope.

Prominentsingers from Kolkata like Usha Uthup, Somalata Acharya, Rupam Islam and Sidhu will participate in a concert titled 'Udaan - The Flight of Hope Concert' to raise funds so that the team is able to compete in the tournament. The event will be held at Nazrul Manch on July 8 in the city so that the team can travel to Denmark and participate.

"This is a wonderful opportunity when children of underprivileged backgrounds are going for an international tournament, the Dana Cup. So this is the right time to step forward and help them in raising funds," singer Sidhu told NDTV.