Football But Not As We Know It: Odd Sights From Bundesliga Comeback

Bundesliga became the first top football league to resume play since the coronavirus pandemic forced the season to be put on hold in March. 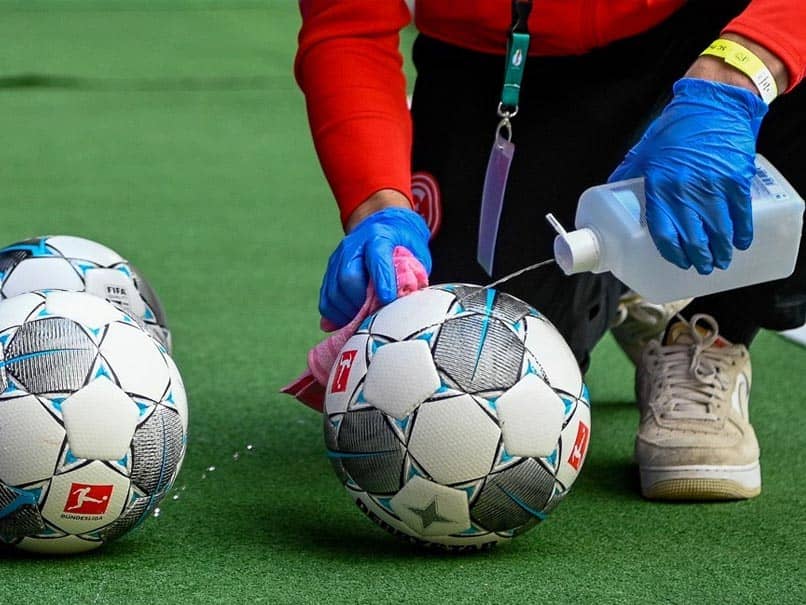 One of the rules states that match balls need to be regularly disinfected by personnel wearing gloves.© AFP

Germany gave football-starved fans reason to be cheerful on Saturday with the Bundesliga's return to action behind closed doors, on a day in which Borussia Dortmund hammered local rivals Schalke in an echoing Signal Iduna Park. Borussia Dortmund's coach and chief executive spoke of the "very strange" and "surreal" experience of playing in an empty stadium. Second-placed Dortmund won 4-0 to close the gap on leaders Bayern Munich to one point as the Bundesliga became the first top league to resume play since the coronavirus pandemic forced the season to be put on hold in March.

Here AFP looks at some of the most eye-catching things from a memorable day in the history of the sport:

Wonderkid striker Erling Braut Haaland began where he left off with the first Bundesliga goal of its restart after a two-month break caused by the coronavirus.

Haaland turned home Thorgan Hazard's low cross just before the half hour to open the scoring against Schalke. It was the 19-year-old's 10th goal in just nine Bundesliga appearances and set his team on their way to a thumping 4-0 derby victory.

Instead of being mobbed by jubilant teammates, Haaland made sure that they all kept their distance as he bobbed a cheeky little dance on the sidelines, in homage to the strict hygiene rules that the league has to follow.

Schalke became the first team to make use of the rule change that allows five substitutions in a game, with David Wagner using the maximum number at Dortmund.

Favre, meanwhile, used four substitutions, with man-of-the-match Raphael Guerreiro replaced by Marcel Schmelzer in the final moments after adding to Haaland's opener with an impressive brace.

The increase in subs, approved by the game's lawmakers earlier this month, was adopted by the Bundesliga to limit the risk of injury following two months without matches.

As well as the unusual sight of normally packed stands shorn of the boisterous support that accompanies the Bundesliga, fans watching on TV saw players wearing masks on the sidelines.

Players on the bench wore protective masks in compliance with the stringent safety guidelines implemented to allow the Bundesliga to resume before Europe's other top leagues.

Schalke alternated players on the bench in order to respect social distancing rules while a contact sport was being played out on the field.

While fans across the world celebrated being able to watch top-level live football after a two-month drought, some supporters questioned the wisdom in restarting the league.

Augsburg followers hung a banner in front of an empty stand that read "Football gives life -- your business is sick" in protest at football being played while the pandemic still takes lives across Europe.

There was little joy for the home side on the pitch either, with Daniel Ginczek's stoppage time strike handing Wolfsburg a 2-1 win and deepening Augsburg's relegation fears.

A resounding victory over Schalke would usually see Dortmund's players celebrating in front of a throbbing 'Yellow Wall', the massive terrace behind the goal at Signal Iduna Park that holds up to 25,000 passionate fans.

However, with the stadium all-but-empty and the only noise being the cheers and clapping of players and coaches, Dortmund still jogged over to applaud the 'Sudtribune' in honour of the fervent support that usually pours from the stand.

The decision to allow German football to restart came with a host of government regulations, including the masks on the bench and plexiglass separating players and journalists for post-match interviews.

One of the rules states that match balls need to be regularly disinfected by personnel wearing gloves, as the German Football League attempts to limit the spread of the virus and finish the 2019-20 season.

Leipzig go one step beyond

RB Leipzig came up with a novel solution to helping players obey German Football League (DFL) rules which stipulate there must be at least 1.5 metres distance between each person on the substitutes bench.

With not enough room in the subs area for the matchday squad, some players had to sit in the stands, which are three metres above the pitch and the dugout on the sidelines.

So Leipzig borrowed a set of aircraft stairs which are normally used to board and disembark passengers from planes, from nearby Halle/Leipzig airport.

RB Leipzig Football
Get the latest updates on India vs Australia Series, check out the India vs Australia Schedule for 2020-21 and Ind vs Aus live score . Like us on Facebook or follow us on Twitter for more sports updates. You can also download the NDTV Cricket app for Android or iOS.