Bundesliga: "Strange And Surreal" Experience Of Playing In Empty Stadium For Borussia Dortmund

The Bundesliga became the first top league to resume play since the coronavirus pandemic forced the season to be put on hold in March. 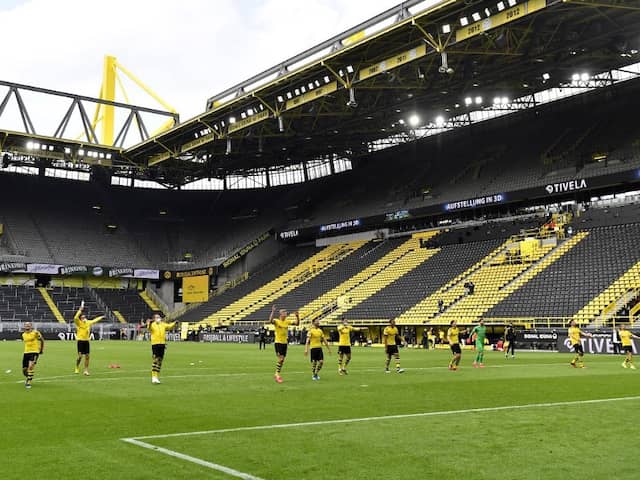 Borussia Dortmund's coach and chief executive spoke of the "very strange" and "surreal" experience of playing in an empty stadium after their side beat Schalke as the Bundesliga returned to action on Saturday. Second-placed Dortmund won 4-0 to close the gap on leaders Bayern Munich to one point as the Bundesliga became the first top league to resume play since the coronavirus pandemic forced the season to be put on hold in March.

Dortmund's CEO Hans-Joachim Watzke said it had been unsettling to watch the game in the club's empty Signal Iduna Park, where more than 80,000 spectators would normally have roared on the teams. It is too dangerous for crowds to gather.

"There is something surreal about it. In the two hours before the match, you receive text messages from all over the world, people who tell you that they are going to watch the match on TV," Watzke said. "And then you drive through your city and there is absolutely nothing happening. You have to get used to it."

"We had a small advantage," said Brandt, who helped create two goals on Saturday.

"We'd already played behind closed doors in Paris and we knew the feeling of silence in the stadium," he said, referring to the 2-0 away defeat which saw the German team exit the Champions League in the last 16.

Portugal winger Raphael Guerreiro added two goals either side of a Thorgan Hazard strike as Schalke suffered the heaviest defeat in the Ruhr derby since 1966.

"Of course, we'd have preferred normal conditions, but in the end, football is football and we tried to have fun," added Brandt.

"It was tough on the legs at the end, because of the long break."

Head coach Lucien Favre landed a playful punch on the arm of ex-captain Sebastian Kehl on the Dortmund bench at the final whistle, but it was Schalke chairman Clemens Toennies who felt bruised.

"I feel a bit beaten up," Toennies told Sky. "Dortmund deserved to win."

The home win was all the more impressive as Favre had to reshuffle the Dortmund line-up just before kick-off.

A calf injury had ruled out England winger Jadon Sancho, who has 14 league goals and 16 assists this season.

Giovanni Reyna was due to make his first Bundesliga start, but the 17-year-old American pulled up with injury in the warm-up and Hazard stepped in.

Dortmund were also missing enforcers Axel Witsel and Emre Can, but in their place Mahoud Dahoud and Thomas Delaney controlled the central midfield.

Haaland picked up where he left off to continue his sensational season.

The lanky teen now has 41 goals in all competitions, including 10 in nine Bundesliga games since joining Dortmund from Salzburg in January.

"4:0 against Schalke - that's quite okay," said Favre as Dortmund avenged their 4-2 home derby defeat a year ago.

He admitted it was strange playing in such exceptional conditions.

"There was no noise - you shoot at the goal, make a top pass, score a goal - and nothing happens," said the Swiss.

"It's hard to judge how good the game was, but the players were very focused."

Schalke are now winless in their last eight league games.

"At least two goals would have been easy to defend.

"Derby defeats are generally unpleasant, even in a bizarre atmosphere.

"I don't we were lacking physically," he insisted, but his team looked off the pace.

"We struggled to defend in the right places.

"Every game is a chance to do better," he added with a home game against strugglers Augsburg beckoning next weekend.

FC Schalke 04 Football
Get the latest Cricket news, check out the India cricket schedule, Cricket live score . Like us on Facebook or follow us on Twitter for more sports updates. You can also download the NDTV Cricket app for Android or iOS.