Luis Suarez required an operation nine days ago to repair damage to the meniscus in his left knee, but is optimistic of recovering in time for the FIFA World Cup finals in Brazil. 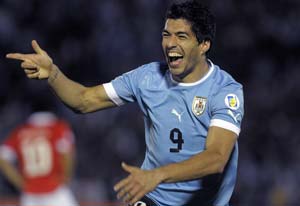 Suarez required an operation nine days ago to repair damage to the meniscus in his left knee, but is optimistic of recovering in time for the finals in Brazil.

The 27-year-old -- who is set to clash with several of his Liverpool team-mates including Steven Gerrard as Uruguay has been drawn with England, Italy and Costa Rica -- had the surgery after suffering an injury in training.

"Things with Luis will depend on how things go with his knee," Tabarez said this week.

"Our main concern is the player's health," he said, adding that he hoped the forward's "fitness will permit him to participate."

Missing from the list were midfielders Sebastian Eguren and Alejandro Silva, this pair culled from Tabarez's provisional squad of 25.

Eguren, who plays for Brazilian side Palmeiras, was part of double world champions Uruguay's side that made it the semi-finals at the 2010 World Cup finals in South Africa.

Uruguay take on Costa Rica in their Group D opener on June 15, before facing England in Sao Paulo four days later with Italy scheduled for June 24.