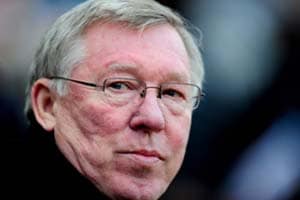 Lampard's penalty winner was especially frustrating for Ferguson, who felt Atkinson was wrong to rule that Chris Smalling's challenge on Yuri Zhirkov was worthy of a spot-kick.

Atkinson also angered Ferguson by failing to send off Luiz for a series of cynical fouls and then dismissing United defender Nemanja Vidic for a second booking in stoppage time.

Inevitably Ferguson was quick to let rip at the official with a typically fiesty post-match tirade.

"You want a fair ref. I don't know how he got this game. I must say, when I saw who it was, I did fear that," Ferguson told MUTV.

"We defended badly for the first goal, That was a bad one to lose but the penalty kick was so soft, deary me."

"It's three years in a row that decisions have changed the game here. It was incredible. Luiz had done (Javier) Hernandez off the ball and nothing was done. Then he does Rooney, clear as day. You are talking about what changed the game in the second half, these are decisions that change the game and he is going to be refereeing every week. I'm proud of my players. They endured a lot of bad decisions against them and they have done their best. They (Chelsea) got a lot of decisions that surprised me in a major game like that."

Ferguson's scathing comments could land him in hot water with the Football Association, but the Scot is unlikely to worry too much about that.

He will be far more concerned about the potential damage done to United's title challenge and he told his players they have no time to feel sorry for themselves as they try to bounce back at Liverpool on Sunday.

United remain four points clear of second placed Arsenal, but the Gunners can close that gap to just one point with victory in their game in hand.

A trip to arch rivals Liverpool is hardly the ideal place to get back on track, especially since Vidic will be suspended, while doubts remain over the fitness of Rio Ferdinand.

Yet Ferguson believes his squad's character will see them through on Merseyside.

"We have got to gather ourselves as we always do. When you lose a game you have to recover, do better the next time and get a result," Ferguson said.

"Sunday is a massive game as it always is when Manchester United play Liverpool and it will be the same again."

United had a golden opportunity to claim their first win at Chelsea since 2002 when Rooney fired home from long-range in the 29th minute.

But the visitors were pushed back by Chelsea in the second half and Brazilian defender Luiz capped an impressive display when he lashed in the equaliser in the 54th minute.

That sparked heavy Chelsea pressure which paid off when Atkinson punished Smalling for the slightest trip on Zhirkov and Lampard drove in the 80th minute penalty before Vidic's red card for trip on Ramires.

With Chelsea still 12 points behind United, Blues boss Carlo Ancelotti admits the victory is unlikely to persuade his players they can still retain the title.

Instead he is keen to accentuate the positives of a gritty comeback against a team of United's quality.

The result lifted Chelsea above Tottenham back into fourth place and provided a shot of confidence that could prove invaluable as they try to win the Champions League.

"We are not able to think about arriving at the top. United are too far ahead but the victory is important for our confidence," Ancelotti said.

"After a performance like that I cannot believe how far ahead they are but this is the table. We have to respect this.

"We had a good performance against Copenhagen and now this result. We have to continue because every game will be important for the Premier League and Champions League.

"We showed a good team-spirit because it is not easy to come back against United.

"We never had a problem with the unity of the players, they always stay together in good and bad moments."

Comments
Topics mentioned in this article
Football Chelsea Ryan Giggs Jonny Evans FC Schalke 04 Wayne Rooney Alex Ferguson
Get the latest updates on ICC T20 Worldcup 2022 and CWG 2022 check out the Schedule, Live Score and Medals Tally. Like us on Facebook or follow us on Twitter for more sports updates. You can also download the NDTV Cricket app for Android or iOS.