Israeli referee Lilach Asulin booked Brazil football legend Ricardo Kaka for no clear reason and then took a selfie with him in an exhibition match. 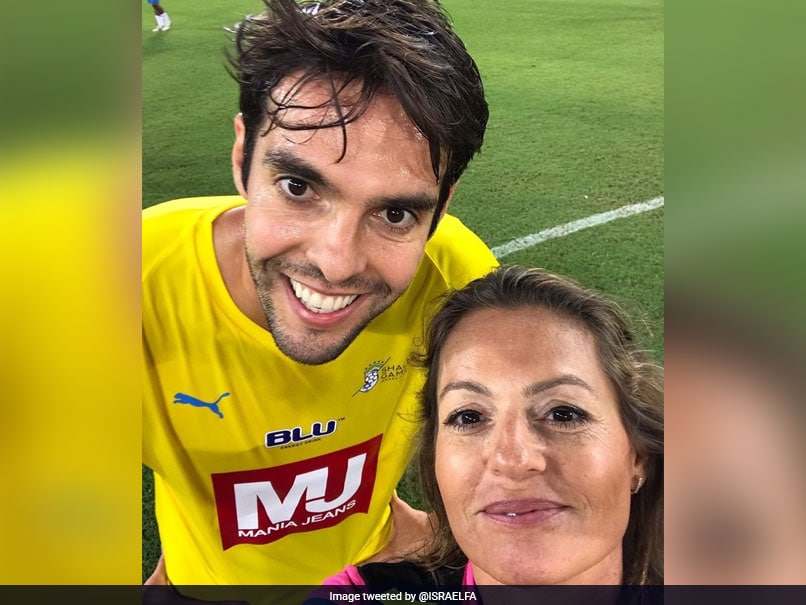 Brazil legend Kaka retired from professional football in 2017 but over the years his fan base still remains intact. In an exhibition match between Brazil and Israel, referee Lilach Asulin of Israel blew the whistle to stop Kaka in his stride and waved a yellow card at him for no clear reason. Shockingly, she went on to whip out a phone from her right pocket and then took a selfie with him -- all this while the game was still on. After the incident, Kaka's teammates were all smiles and later shook hands with the Israeli referee. Meanwhile, the Real Madrid and AC Milan legend look bewildered when he was stopped in his tracks by the referee but then couldn't stop smiling when she took her phone out.

Ref gives Kaka a yellow card then takes a selfie with him.. pic.twitter.com/VKvfDxLlUx

this ref gave Kaka a yellow card just to take a selfie with him pic.twitter.com/luku9ueXq0

When you are a big fan of Kaka and you have no option to take selfie with him. pic.twitter.com/O2gdR8okjj

The match between the Brazilian legends and the Israeli stars was played to promote coexistence, according to a report in The Times Of Israel. Brazil beat Israel 4-2 in the match which was attended by nearly 28,000 fans.

After the match, Kaka sent out a positive message. "The goal is to spread the values of soccer. We know it can unite peoples and even neutralize situations of conflict," he was quoted as saying by The Times Of Israel.

Brazil legends Ronaldinho, Bebeto, Roberto Carlos, Rivaldo, Cafu, Emerson, and Cesar Sampaio, who have all won World Cup titles were present for the match. Among the Israeli stars Arik Benado and Yaniv Katan represented their side.

Kaka retired with 92 international caps to his name. The attacking midfielder had scored 29 goals for Brazil and won the Serie A and La Liga title once each with his club sides.

Brazil Ronaldinho Gaucho Rivaldo Football
Get the latest updates on India vs South Africa and check out  Schedule, Results and Live Score. Like us on Facebook or follow us on Twitter for more sports updates. You can also download the NDTV Cricket app for Android or iOS.