Javier Mascherano was sent off by referee De Cerro Grande on Sunday in the match against Eibar for apparently insulting his linesman in graphic terms. 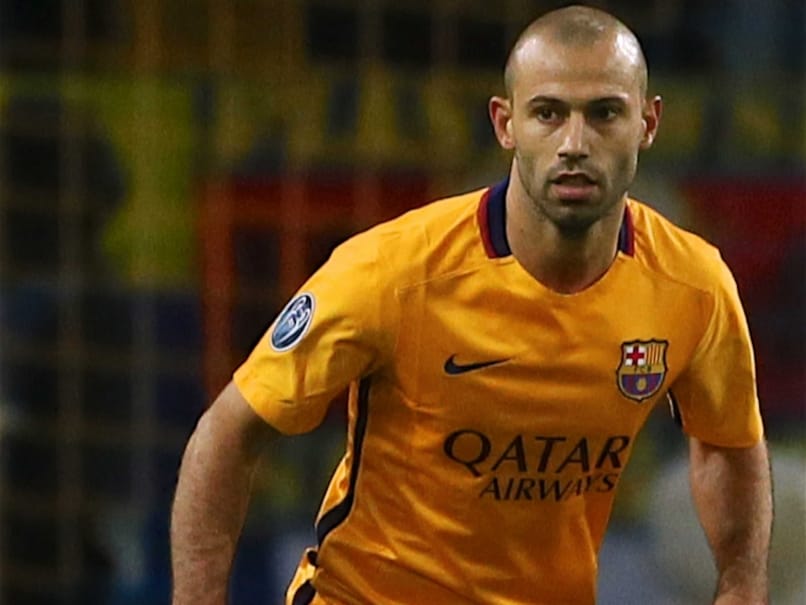 Javier Mascherano received the support of Barcelona manager Luis Enrique, who said the footballer did not argue with the linesman. © AFP
Barcelona:

FC Barcelona midfielder Javier Mascherano faces the prospect of a four-match ban after being sent off towards the end of a 3-1 win at home to Eibar in a La Liga match. (Barcelona Defeat Eibar in La Liga)

Mascherano was sent off by Madrid based referee De Cerro Grande on Sunday for apparently insulting his linesman in graphic terms, using an Argentinean term 'La concha de tu madre' after his failure to give a foul in Barcelona's favour.

The strong words when translated directly can be taken to mean something like "son of a bitch," and similar to the words which saw Gerard Pique sent off and punished with a four-game ban during the return leg of the Spanish Supercup this football season.

Speaking after the game, which Barcelona won thanks to a hat-trick from Luis Suarez, chief coach Luis Enrique defended Mascherano, who is one of his key players, arguing that when he had sworn, "he wasn' t talking about the referee or the linesman," and asked the officials to be more flexible in their interpretation of the rules.

If the Spanish FA follow the precedent set by Pique's sanction, Mascherano will miss the next four La Liga games, something the coach described as "quite serious", especially as that would include the first 'clasico' of the season, which sees Barcelona visit traditional rivals Real Madrid.

The incident has done nothing to ease worries in the camp of the Catalan giants that there is a conspiracy against the club, worries which became stronger last week when it was revealed that a La Liga linesman had placed a complaint with anti-corruption in Spain alleging he had been told to favour Real Madrid if he was chosen to officiate in the clasico.

The fact that Sunday's referee is from the capital has also caused concern, although in Del Cerro Grande's defense, he also made a major error in Barcelona's favour, with their equalising goal against Eibar scored from an offside position.

Comments
Topics mentioned in this article
Barcelona Javier Mascherano Football
Get the latest updates on India vs Australia Series, check out the India vs Australia Schedule for 2020-21 and Ind vs Aus live score . Like us on Facebook or follow us on Twitter for more sports updates. You can also download the NDTV Cricket app for Android or iOS.