Dozens of candles and flowers could also be seen among the tributes, as well as an image of Ganesh -- a Hindu god often found at Thai Buddhist temples. 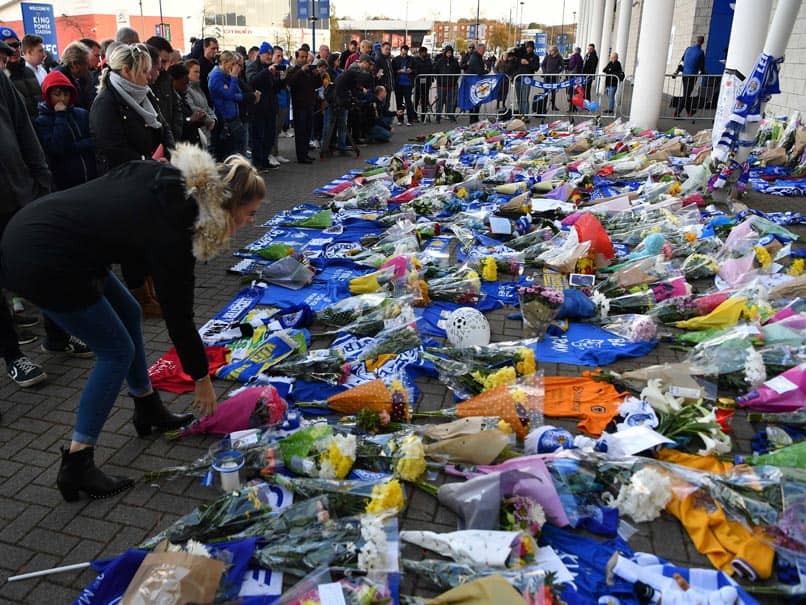 Fans laid down football scarves and shirts outside Leicester City's King Power stadium on Sunday, a day after a helicopter belonging to the club's Thai owner crashed outside the grounds. Dozens of candles and flowers could also be seen among the tributes, as well as an image of Ganesh -- a Hindu god often found at Thai Buddhist temples. "I was really upset, I can't get to sleep over it," Kanti Patel, a Leicester City fan, told AFP as emergency workers pored over the crash site. There was no confirmation whether 60-year-old billionaire Vichai Srivaddhanaprabha, who frequently flies to and from Leicester's home games by helicopter, was on board the aircraft. But many in the city in central England and in Vichai's homeland already feared the worst for the man they credit with the club's against-all-odds Premier League title victory in 2016.

Another fan, Tom Lievers, arrived with a "Champions" scarf to pay tribute to Vichai.

"Well you know where we were when he bought the club -- we were absolutely nowhere. So I brought down my 'Champions' scarf because he made us champions."

Andrew Aldwinckle said: "He was more like he was a supporter, a proper supporter, rather than a money man. He was one of the crowd. As far as we're concerned, that's it."

At a football game in central Bangkok, Leicester City fan Apichart Jitratkavee said: "He is an important person who has raised the bar of Thai football further.

"There were projects by Leicester City to select Thai teenagers to train in the club's academy. They will have a chance to serve the nation in the future."

"I think having him as an owner of the Liester City made people know Thailand more," he said.

Leicester City Football
Get the latest updates on India vs Australia Series, check out the India vs Australia Schedule for 2020-21 and Ind vs Aus live score . Like us on Facebook or follow us on Twitter for more sports updates. You can also download the NDTV Cricket app for Android or iOS.