The helicopter, belonging to Leicester City owner Vichai Srivaddhanaprabha, was seen enveloped in flames in mobile phone images from the scene. 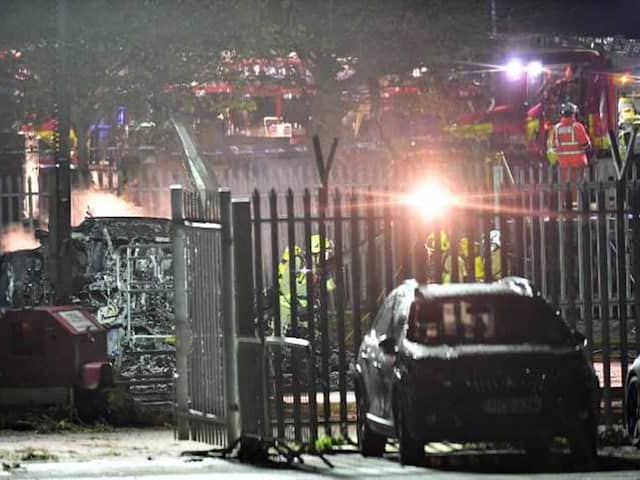 Emergency services work at the scene on the wreckage of the helicopter that crashed in a car park.© AFP

A helicopter belonging to Thai billionaire Vichai Srivaddhanaprabha crashed on Saturday near the stadium of his Premier League club Leicester City. The helicopter was seen enveloped in flames in mobile phone images from the scene and an AFP photographer later saw smoke coming from the wreckage. It crashed shortly after take-off following Saturday's game against West Ham in a car park close to King Power Stadium -- a scene of jubilation two years ago when underdogs Leicester City won the Premier League in a remarkable footballing feat.

"Emergency services are currently at the King Power Stadium where an aircraft came down in a car park behind the ground," police said.

Thai businessman Vichai, who has poured millions into the club, often takes off from the pitch in his helicopter when he attends a Leicester home game but it is not known whether he was in the aircraft when it crashed.

Freelance photographer Ryan Brown, who was covering the game, told BBC Radio 5 Live he saw the helicopter rise out of the stadium before it crashed.

"Literally the engine stopped and I turned around, and it made a bit of a whirring noise. It turned silent, blades started spinning and then there was a big bang," he said.

He said he saw "a huge fireball" when he ran to the scene.

The identities of the pilot and any passengers on board have not yet been confirmed. It is also not yet known if anyone on the ground was injured.

"We are assisting Leicestershire Police and the emergency services in dealing with a major incident at King Power Stadium," the club said in a statement.

Vichai, who owns the King Power company, bought the club in 2010 and became chairman the following February.

He is a beloved figure in the club and the city.

"Thoughts and prayers with all -- particularly owners who've done so much for Club and our City," Leicester's mayor Peter Soulsby tweeted.

Sky Sports said the helicopter took off from the pitch between 1930 and 1945 GMT but developed problems shortly afterwards with its tail rotor.

The local ambulance service said it was alerted at 2138 GMT.

"We sent a doctor, two paramedics in ambulance cars, a crewed ambulance and our Hazardous Area Response Team, with the first resource arriving within two minutes of the call," it tweeted.

It was under Vichai's ownership that Leicester created one of the biggest shocks in English football history by winning the 2015/16 Premier League, having started the season as 5,000/1 outsiders for the title.

West Ham defender Pablo Zabaleta, who played in Saturday's game, tweeted: "My thoughts and prayers are with all those involved in the helicopter accident at Leicester City."

His teammate Declan Rice tweeted: "Horrendous scenes at the king power tonight, my prayers & thoughts go out to everyone involved at Leicester."

Footballing legend Gary Lineker, a former Leicester City player who was presenting BBC's Match of the Day when the crash happened, tweeted: "That was the most difficult @BBCMOTD I've ever hosted... A terrible tragedy. Heartbreaking."

Vichai made major investments in the club after his purchase, returning them to England's Premier League from the second-tier Championship in 2014.

They seemed initially outmatched by richer and more established clubs from London, Liverpool and Manchester, languishing at the very bottom the table for most of the 2014-15 season.

The Foxes, as the team are known, then engineered what fans now fondly refer to as the "Great Escape", winning seven of their last nine matches.

They ended up finishing 14th, securing themselves another season in Europe's richest league in 2015-16.

But not even their most devout fans could have imagined what happened next.

Vardy, signed from unheralded Fleetwood Town, scored in 11 consecutive matches, propelling the men in blue to a title without parallel in Premier League history.

The success also qualified them for the first time for the Champions League, the lucrative championship played by Europe's most successful side, including Barcelona and Real Madrid.

There, Leicester City defied the odds yet again, winning their group before eventually losing the quarter-final 2-1 over two matches to Atletico Madrid.

Leicester City English Premier League Football
Get the latest updates on IPL 2020, check out the IPL Schedule for 2020 and Indian Premier League (IPL) Cricket live score . Like us on Facebook or follow us on Twitter for more sports updates. You can also download the NDTV Cricket app for Android or iOS.