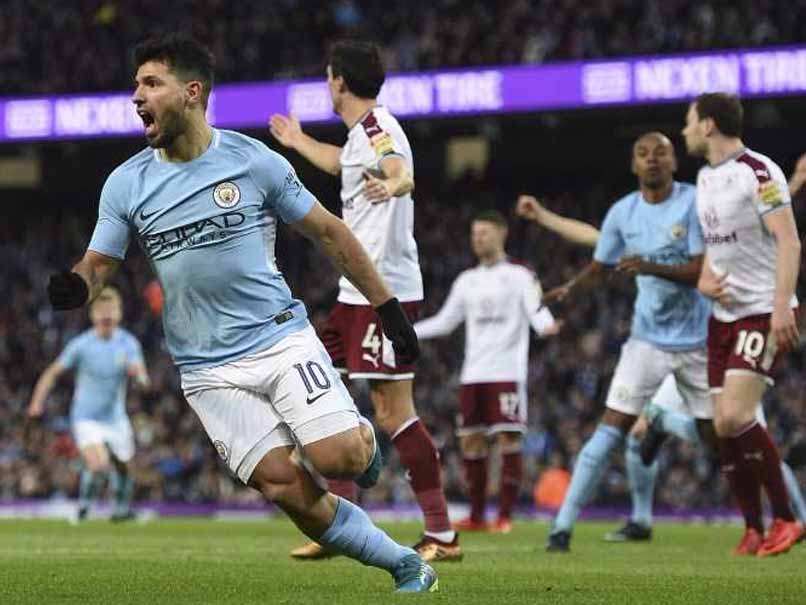 Sergio Aguero fired Manchester City to a 4-1 win over Burnley in the FA Cup third round, while Mark Hughes is fighting to remain Stoke City boss after a 1-2 loss at minnows Coventry on Saturday. City boss Pep Guardiola named a strong team including Aguero, Leroy Sane and Raheem Sterling at Eastlands, but the runaway Premier League leaders fell behind in the 25th minute. Ashley Barnes blasted into the top corner after City defender John Stones sliced his attempted clearance. However, Burnley hadn't won at City since 1973 and Argentina striker Aguero ensured that run continued.

City, who last tasted defeat in domestic competition in their FA Cup semi-final against Arsenal in April, were level in the 56th minute when Aguero fired home from Ilkay Gundogan's pass.

Aguero then finished off a superb backheeled pass from Gundogan in the 58th minute.

Sane prodded home to put the result beyond doubt in the 71st minute and Bernardo Silva made it four in the 82nd minute.

"Both of Sergio Aguero's goals were amazing, they were clever and quick and I am happy with both of his goals," Guardiola said.

"It's an honour for me to have Aguero under my command. He is an essential player for us."

At the Ricoh Arena, Hughes could face the sack after fourth tier Coventry rolled back the years with a memorable cup result.

With Stoke in the relegation zone, it was reported this week that the club's hierarchy had considered dismissing Hughes and whether he can survive any longer must be in doubt.

Coventry have fallen on hard times since winning the FA Cup in a classic 1987 final against Tottenham and reside in League Two -- their first time at that level since the 1950s -- after a spell having to play their home matches in Northampton due to a stadium row.

Jordan Willis put the underdogs ahead in the 24th minute with his first goal in a year.

Willis conceded a 52nd minute penalty with a foul on Ramadan Sobhi and Charlie Adam stepped up to equalise.

But Coventry right-back Jack Grimmer wove through Stoke's defence and side-footed past Jack Butland in the 67th minute.

"We're all under pressure. I can take the pressure and the focus. I'm not naive and I realise people will talk about my position," Hughes said.

"But we've got good owners who will make the right decisions for the club. They have done before and they'll do it again."

At the Vitality Stadium, Bournemouth manager Eddie Howe made eight changes as he prioritised Premier League survival and it needed a second half revival from his understudies to rescue a 2-2 draw against Wigan.

Northern Ireland forward Will Grigg gave Wigan a fourth minute lead from close-range and there was worse to come for Howe in the 29th minute when Emerson Hyndman's own goal doubled the visitors' lead.

Yet Lys Mousset reduced the deficit for Bournemouth in the 55th minute and League One leaders Wigan, who won the FA Cup in 2013, were denied a surprise win by Steve Cook's goal two minutes into stoppage-time.

Newcastle had been tipped as potential upset victims, but they swept away fourth tier leaders Luton with a 3-1 win at St James' Park.

Rafael Benitez's side ran riot in the first half as Ayoze Perez netted in the 30th and 36th minutes before Jonjo Shelvey struck after 39 minutes.

West Bromwich Albion won for the first time in 21 games in all competitions, 2-0 at fourth tier Exeter giving boss Alan Pardew his first victory since replacing the sacked Tony Pulis.

Salomon Rondon's long-range drive put Albion ahead in the second minute and Jay Rodriguez added the second goal in the 25th minute.

Southampton won 1-0 at Fulham, Huddersfield beat Bolton 2-1, Swansea drew 0-0 at Wolves and Leicester were held to a 0-0 draw at third tier Fleetwood.

Comments
Topics mentioned in this article
Manchester City Stoke City Sergio Agüero Raheem Sterling Parker Football
Get the latest updates on ICC T20 Worldcup 2022 and CWG 2022 check out the Schedule, Live Score and Medals Tally. Like us on Facebook or follow us on Twitter for more sports updates. You can also download the NDTV Cricket app for Android or iOS.