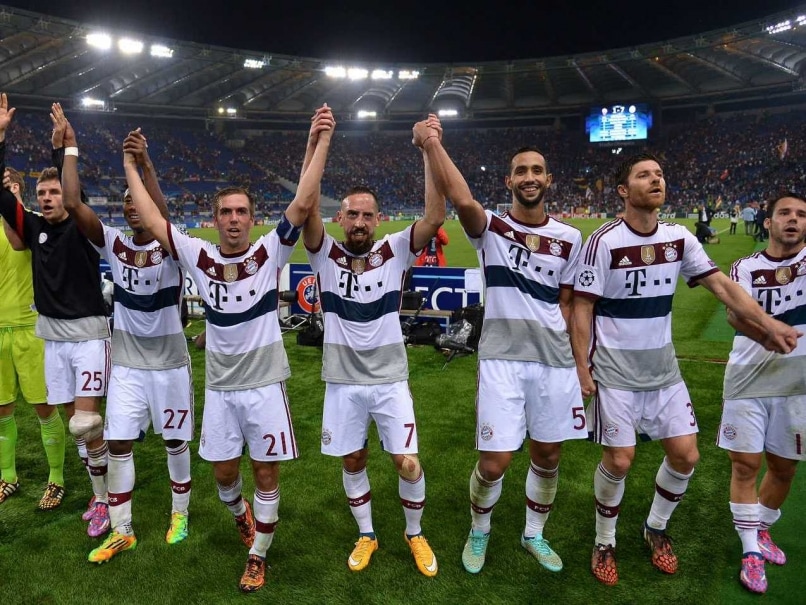 Bayern Munich produced a stunning display to demolish Roma 7-1 on Tuesday but they were not the biggest winners on the most prolific evening in Champions League history.

A record 44 goals were scored in just eight group games as Shakhtar Donetsk destroyed BATE Borisov 7-0 in Belarus and Chelsea recorded their biggest win in the competition, thumping Maribor 6-0 at Stamford Bridge.

There were also wins for Barcelona, Paris Saint-Germain, Schalke and Porto while Manchester City drew 2-2 away to CSKA Moscow, but it was Bayern who stole the show.

Pep Guardiola's side underlined their status as one of the contenders to win the Champions League as they took apart a Roma outfit who had enjoyed a fine start to the campaign.

An Arjen Robben brace, Mario Goetze, Robert Lewandowski and a Thomas Mueller penalty made it 5-0 at the break in the Group E game.

Gervinho got one back for Roma in the second half before substitutes Franck Ribery and Xherdan Shaqiri added further goals in a performance reminiscent of Germany's 7-1 win over Brazil in the World Cup semi-final in July, a game in which five of Bayern's line-up against Roma featured.

"This is a one-off result, it doesn't reflect the true difference between the sides," a modest Guardiola later said.

However, Bayern's performance was outdone by Shakhtar, as the Ukrainians romped to a remarkable victory away to BATE in Group H.

Brazilian forward Luiz Adriano became only the second player to score five goals in a Champions League game after Lionel Messi, with his tally including four goals in the space of 16 first-half minutes.

His compatriots Alex Teixeira and Douglas Costa were also on target as Shakhtar ended BATE's unbeaten home record stretching back over a year in emphatic fashion.

Bayern and Shakhtar's feat in each scoring seven goals away from home on the same night is all the more remarkable given that only two teams had ever previously done so in the Champions League -- Marseille in 2010 and Lyon in 2011.

Jose Mourinho's Chelsea fell just short of that mark against Slovenian champions Maribor in Group G, with Loic Remy, a Didier Drogba penalty and John Terry putting them three up at the break.

Eden Hazard took centre stage in the second half, forcing Mitja Viler into scoring an own goal before netting a penalty and getting his second of the night at the death, while Agim Ibraimi missed a penalty for the visitors.

"We played seriously," said Mourinho. "We faced the game in the right way and even at half-time at 3-0 the boys kept playing at a good speed and with good quality."

Yet that match was not the most prolific in the group, as Schalke stayed within two points of Chelsea by beating Sporting -- who played for almost an hour with just 10 men -- 4-3 in Gelsenkirchen.

Chinedu Obasi, Klaas-Jan Huntelaar and Benedikt Hoewedes scored to have Schalke in control after Nani had put Sporting ahead, but an Adrien Silva brace made it 3-3 and it looked as if the Portuguese side would return home with a draw.

However, substitute Eric Maxim Choupo-Moting converted a stoppage-time penalty to hand new Schalke coach Roberto di Matteo a second win from as many games in charge.

Manchester City's stumbling start in Group E continued as they threw away a 2-0 lead to draw with CSKA in a game played behind closed doors in sub-zero temperatures.

Sergio Aguero and James Milner netted in the first half for the English champions only for Seydou Doumbia to pull one back before a late Bebras Natcho penalty earned the Russians a point, and left City third in their section.

"We've lost two very important points but we have nine points more to play for and I believe we still have enough chances to reach the knockout stage," said bullish City manager Manuel Pellegrini.

PSG remain top of Group F after a 1-0 win at APOEL, secured thanks to a late Edinson Cavani goal, while Barcelona dismissed Ajax 3-1 to stay a point behind in second.

Neymar and Sandro Ramirez netted for the Catalans either side of a strike from Lionel Messi, who is now level with Cristiano Ronaldo on 69 Champions League goals, two behind Raul's all-time record of 71. Anwar El Ghazi scored for the visitors.

Shakhtar are second in Group H behind Porto, who beat struggling Athletic Bilbao 2-1 with Ricardo Quaresma netting the winner after Guillermo Fernandez had cancelled out Hector Herrera's opener for the Portuguese hosts.

Comments
Topics mentioned in this article
Bayern Munchen Chelsea Roma NK Maribor Shakhtar Donetsk BATE Manchester City Football
Get the latest updates on ICC T20 Worldcup 2022, check out the Schedule and Live Score. Like us on Facebook or follow us on Twitter for more sports updates. You can also download the NDTV Cricket app for Android or iOS.