Australian star Tim Cahill revealed his agony at missing out on a chance to end his FA Cup final heartache after Everton's 2-1 defeat against arch rivals Liverpool in the semi-finals at Wembley. 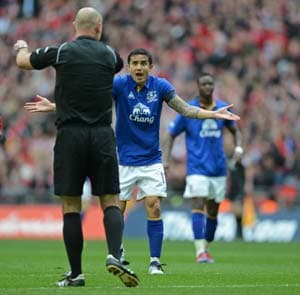 Australian star Tim Cahill revealed his agony at missing out on a chance to end his FA Cup final heartache after Everton's 2-1 defeat against arch rivals Liverpool in the semi-finals at Wembley.

Cahill was starting to dream of a third appearance in the FA Cup final after Nikica Jelavic fired Everton into a first-half lead on Saturday.

But a horrendous mistake from Sylvain Distin, whose wayward backpass allowed Luis Suarez to equalise just after the hour, turned the tide in Liverpool's favour and Andy Carroll headed the winner in the 87th minute to shatter Cahill's bid to win the competition for the first time.

While losing to Merseyside neighbours Liverpool in such a high-profile match was painful for everyone associated with Everton, it was especially agonising for Cahill, who had been desperate to finally win the Cup after two final defeats.

The 32-year-old played for Millwall in their 3-0 defeat against Manchester United in the 2004 final and was on the losing side again five years later when Everton faced Chelsea in the 2009 edition.

"This is sad because I've had two finals before in the FA Cup. And to now not get to a final, it's heartbreaking," Cahill said.

"As much as it is for me, I really feel for the fans because it was there - you could feel it and touch it - and even as players we didn't do it in the end."

Cahill conceded that Everton had only themselves to blame for the defeat as they looked capable of holding onto their lead before Distin's howler.

"They scored two goals from two errors from us," he said. "As a team, we'll look at it, but we win together and lose together and that's the only way I can sum it up.

"Sylvain's been our player of the season. One mistake doesn't sum up his season.

"He's been immense and, as a team, we possibly should've still been out there playing extra-time.

"We shouldn't have conceded the second goal, giving the free-kick away and defending the way we did.

"As for Sylvain, he's a top player and it happens in football. We've all been there at one stage in our career."

Liverpool will face either Tottenham or Chelsea in next month's final, but Cahill doesn't believe Kenny Dalglish's side will follow their League Cup final victory earlier this season with another Wembley triumph.

"I think it's going to be difficult for them. They've had an indifferent season and they've just got away with it against us," he said.

"A few decisions didn't go our way but I'll just say they've got a lot of work to do."

Comments
Topics mentioned in this article
Football Manchester City Arsenal Bolton Wanderers Manchester United Liverpool Everton Mark Schwarzer Tim Cahill Sunderland Australia Cricket Team
Get the latest updates on IPL 2020, check out the IPL Schedule for 2020 and Indian Premier League (IPL) Cricket live score . Like us on Facebook or follow us on Twitter for more sports updates. You can also download the NDTV Cricket app for Android or iOS.