Beaten semi-finalists in last season's competition, Everton were without the injured Marouane Fellaini but made a purposeful start and took the lead in the 15th minute. 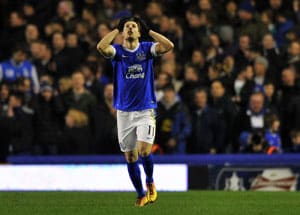 Everton succeeded where Merseyside rivals Liverpool had failed by beating Oldham Athletic 3-1 on Tuesday to reach the FA Cup quarter-finals.

Third-tier Oldham eliminated Liverpool in round four and held Everton to a 2-2 draw in their initial fifth-round meeting 10 days ago, but their cup heroics were ended in the replay at Goodison Park.

Goals from Kevin Mirallas, Leighton Baines and Leon Osman took David Moyes' side into the last eight, where they will face Wigan Athletic, with Oldham's cup talisman Matt Smith replying for the visitors.

Beaten semi-finalists in last season's competition, Everton were without the injured Marouane Fellaini but made a purposeful start and took the lead in the 15th minute.

After a patient build-up, Darron Gibson shaped a beautiful cross into the box from deep on the right and Mirallas stole in to finish with an adroit half-volley from eight yards.

Oldham almost drew level immediately through former Everton youngster Jose Baxter, who seized on a loose ball on the edge of the box but saw his curling shot bounce back off the right-hand upright.

The visitors then had a penalty appeal turned down when Phil Jagielka's clearance struck Gibson on the arm.

Their resurgence proved short-lived, however, as Baines helped Everton stamp their authority on the tie.

Having seen a vicious strike saved by Oldham goalkeeper Dean Bouzanis minutes earlier, the England left-back doubled his side's advantage from the penalty spot in the 34th minute after Connor Brown was penalised for handball.

Everton centre-back Jagielka blazed over the Oldham bar early in the second half, while Bouzanis saved from Osman.

In response, Oldham introduced giant striker Smith, scorer of two goals against Liverpool and an injury-time equaliser in the first game with Everton.

Steven Pienaar whipped a cross into the box from the left and Osman's flicked header deceived Bouzanis, who was distracted by the onrushing Nikica Jelavic.

Smith replied immediately, nodding in a right-wing corner from close range, but Everton goalkeeper Tim Howard resisted Oldham's efforts to claw their way back into the game.

Comments
Topics mentioned in this article
Football Manchester City Manchester United Bolton Wanderers Everton Arsenal Oldham Athletic Leighton Baines Marouane Fellaini Kevin Mirallas Leon Osman
Get the latest updates on ICC T20 Worldcup 2022 and CWG 2022 check out the Schedule, Live Score and Medals Tally. Like us on Facebook or follow us on Twitter for more sports updates. You can also download the NDTV Cricket app for Android or iOS.