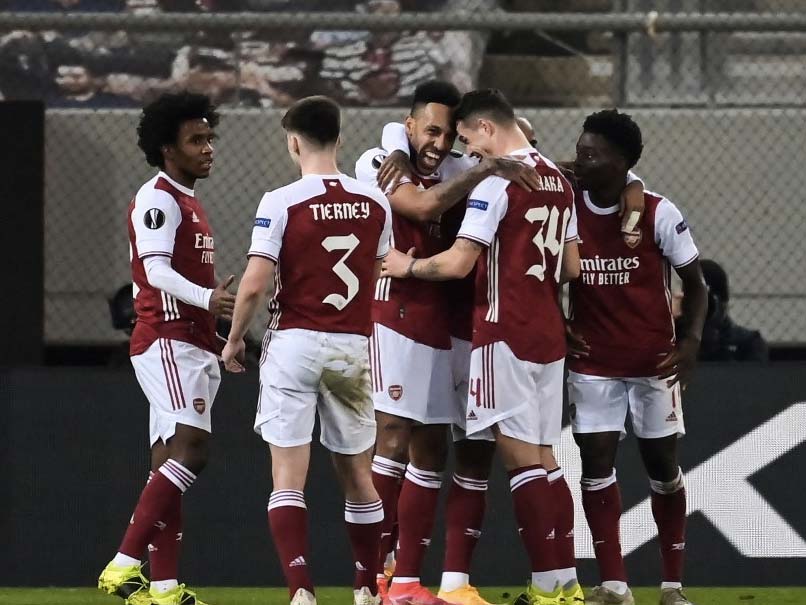 Pierre-Emerick Aubameyang scored a brace for Arsenal, including a late winner against Benfica.© AFP

Pierre-Emerick Aubameyang scored twice including a late winner as Arsenal qualified for the last 16 of the Europa League on Thursday with a 3-2 victory over Benfica in Greece, while Manchester United and Rangers cruised through to the next round. The Gabon striker put Arsenal ahead at the Karaiskakis stadium in Piraeus in their home leg of a tie relocated due to Covid-19 travel restrictions between Portugal and the United Kingdom. Diogo Goncalves levelled the contest with a magnificent free-kick and Rafa Silva gave Benfica a 2-1 lead on the night when he took advantage of an error from Dani Ceballos on the hour.

Kieran Tierney rifled in an equaliser and Aubameyang headed in the decisive goal from Bukayo Saka's cross on 87 minutes, earning the Gunners a 4-3 aggregate victory and saving them from an unusual away goals exit following a 1-1 draw in the first leg in Rome.

"Everyone is happy tonight. This is what gives me power every day, take errors from the past and transform to strength," Aubameyang told BT Sport.

"The team showed a lot of character and we deserved the win. It was a hard game. What we showed tonight will be an example for the future."

United cemented their place in Friday's draw with a 0-0 draw at home to Real Sociedad, having effectively clinched the tie last week with an emphatic 4-0 win on neutral ground in Italy.

Mikel Oyarzabal's awful penalty miss represented the best chance at Old Trafford for La Real, while Bruno Fernandes rattled the crossbar and Axel Tuanzebe's header was disallowed for a foul.

Leicester City, who are behind second-placed United in the Premier League only on goal difference, were knocked out after sliding to a 2-0 loss at home to Czech champions Slavia Prague.

Lukas Provod fired Slavia in front just after half-time following a goalless draw in the first leg, and Senegalese teenager Abdallah Sima ensured the visitors extended their run in the competition.

Steven Gerrard's Rangers progressed following their 5-2 win over Belgian side Antwerp at Ibrox, with five different players on target for the Scottish league leaders.

After a dramatic 4-3 win in the first leg last week, goals from Alfredo Morelos, Nathan Patterson and Ryan Kent put Rangers in control before late penalties from Borna Barisic and Cedric Itten wrapped up the tie 9-5 on aggregate.

"I'm very satisfied, the performance was outstanding in a lot of areas," said Gerrard.

"The first three were top high-level goals. But, as a perfectionist, we still have to look at the areas we went wrong tonight."

AC Milan squeezed past Red Star Belgrade on away goals after a 1-1 draw in a clash of former European champions at the San Siro.

Franck Kessie's early penalty was enough to book Milan's place in the last 16 despite El Fardou Ben Nabouhane equalising as the tie finished 3-3 over the two legs.

Napoli's dismal run continued as they were knocked out 3-2 on aggregate by Granada despite winning 2-1 in the return fixture in Italy.

Ajax eliminated French Ligue 1 leaders Lille with a 2-1 victory in Amsterdam to complete a 4-2 overall win, while Gerard Moreno netted both goals as Villarreal dumped out Salzburg 4-1 on aggregate.

Egyptian forward Ahmed Hassan's 88th-minute strike in Eindhoven sent Olymiapkos through at the expense of PSV 5-4 on aggregate, while Roma and Young Boys brushed aside Braga and Bayer Leverkusen respectively.

Dinamo Zagreb and Dynamo Kiev complete the line-up for the last 16, with Tottenham Hotspur also in the mix after destroying Wolfsberg of Austria by an aggregate score of 8-1 on Wednesday.