France cruised past Albania 4-1 on Saturday to move back to the top of their group in qualifying for Euro 2020. 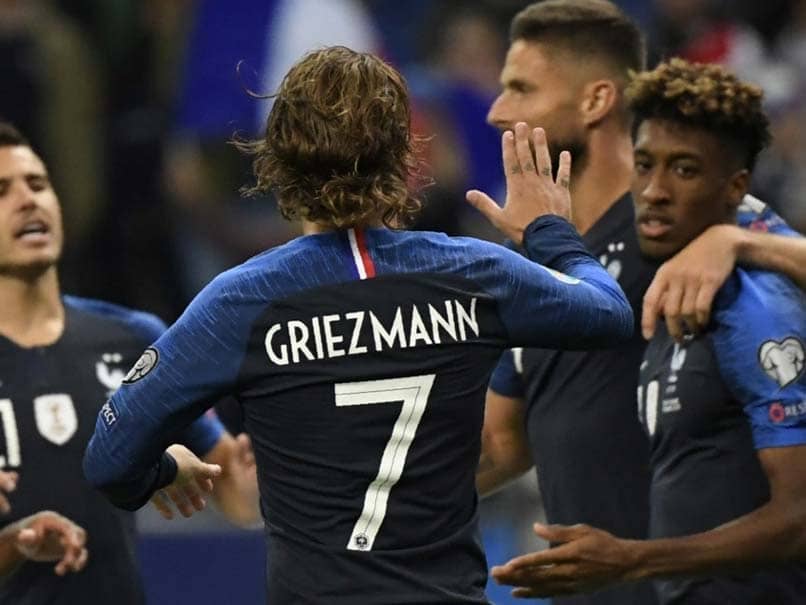 Kingsley Coman scored twice as world champions France cruised past Albania 4-1 on Saturday to move back to the top of their group in qualifying for Euro 2020. "It went well for me," Coman told French television after being selected man of the match. The Bayern Munich attacker was not part of the victorious French squad at last year's World Cup. On Saturday, he replaced Kylian Mbappe, one of three starters from last year's Moscow final who was missing injured. Asked if Coman had finally put his international career on track, France coach Didier Deschamps said: "That was closer to what he has been doing for the last year for Bayern. He was more drawn to the goal. He was more decisive."

Iceland briefly led the standings in Group H outright after beating Moldova 3-0 earlier in the day, and are joined by Turkey, who scored in the last minute to edge Andorra, 1-0 as well as Les Bleus at the summit on goals difference.

The Euro 2020 qualifying match kicked off late because the hosts played the Andorran anthem.

"It was a big thing," said Albania's Italian coach Edoardo Reja. "The players said they wouldn't start without the right anthem."

After the stadium announcer apologised to the "Armenian fans" the correct song was played.

'Could have won by more'

When the visitors did escape from their own half they often found space against a French midfield without Paul Pogba and N'Golo Kante.

At the other end, France repeatedly tore their guests apart with quick, incisive attacks.

Les Bleus took the lead after eight minutes when Coman, who had not scored on the international level since March 2016, outpaced the visiting defence as he ran onto a precise pass from Raphael Varane and toed the ball inside the near post.

Then, Olivier Giroud a couple of feet past the far post, opted to head back to a non-existent teammate rather than nod the ball over the line.

The Chelsea striker did score his 36th international goal in the 27th minute. Lucas Hernandez escaped down the left and crossed for Giroud, who had outpaced the defence, to side-foot the ball home.

Nine minutes before half time, left back Hernandez won a penalty.

He was up-ended on the edge of the six yard box by Albanian captain Mergim Mavraj. Antoine Griezmann blasted the spot kick off the underside of the bar and the ball bounced clear.

France ended a bright first half 2-0 up.

Les Bleus controlled the second half comfortably. Griezmann and Giroud wasted chances before Coman hit his second after 68 minutes. Set up in the penalty area by Griezmann.

Jonathan Ikone, who had replaced Coman to make his France, added a fourth on 85 minutes. The Lille midfielder exchanged passes with Nabil Fekir and scored with a low diagonal shot from close range.

Albania responded in the final minute. Sokol Cikalleshi broke clear, he was brought down by Hugo Lloris and then converted the penalty kick.

"The balance sheet was very positive," said Deschamps. "We could have won by more."

"We did what we had to do, even if we relaxed a bit at the end."

Antoine Griezmann Football
Get the latest updates on India vs England Series, India vs England , live score and IPL 2021 Auction . Like us on Facebook or follow us on Twitter for more sports updates. You can also download the NDTV Cricket app for Android or iOS.